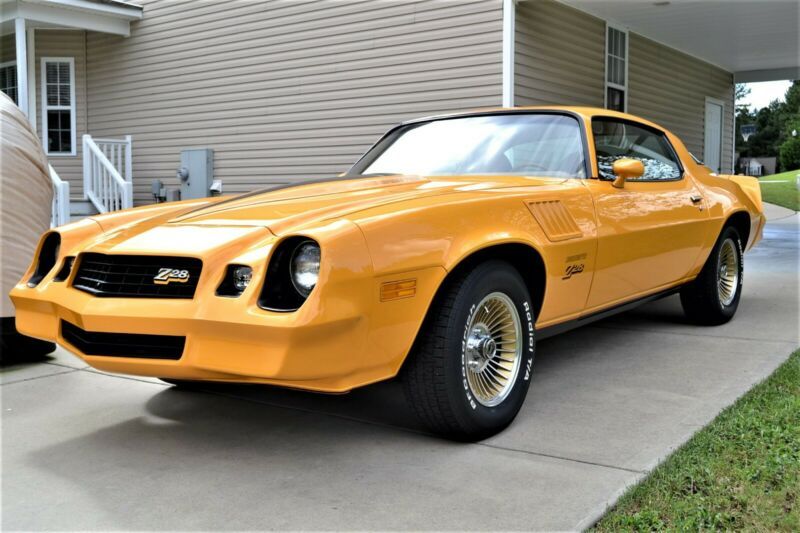 Of the 2,311 Yellow Orange Z28s that were produced, this maybe the finest one available to purchase. It is most
definitely unique as I’ve added a CROSS RAM dual four intake and on it sits two specially modified NASCAR 390 cfm
Holley carbs. A true car enthusiasts dream vehicle!

For the past decade, we have been restoring and building 2nd Gen Trans Ams and some we’ve built to a level far
beyond what the factory was allowed to produce. Five of our builds have reached the status that we’ve named and
numbered “Super Bandits” and they are awesome vehicles to own and drive. During the years of building hp TAs,
I’ve thought about restoring/building a 2nd gen Z28 to the Super Car status and what I’m offering for sale is
our prototype “Super Z”.

Below are a few words of what we have restored on the car over the many years of my son and I owning it and you can
view the pictures of the finished results.

The hood, fenders, bumper covers, mirrors and trunk spoiler were removed and painted separately. The front frame
received a new set of upgraded poly body bushings and it was properly aligned to the body. Upper A arm bushings
were replaced along with the sway bar bushings. The door hinge pins/bushings were replaced and the doors were
properly aligned. The original Yellow Orange paint was stripped and minor dings were repaired. All parts were
primed and then block sanded multiple times in preparation for top coat paint to be applied. Similar to how Mark
Worman at Graveyard Carz paints his high end restored vehicles, this one was sprayed in base clear twice with a few
years allowed before the 2nd spraying was done. This makes for a very nice smooth paint that will remain great
looking for many years. The recently sprayed 2nd coating of base Yellow Orange and clear was Trizact wet sanded and
buffed to a shine.


After spraying was completed, new window felts were installed along with door and body weather stripping.
Windshield moldings were stripped, painted and installed. New decals were then applied and the custom Phoenix
Graphix hood scoop decal looks as though this ’78 could have come from the factory with the upgraded ’80 hood
scoop.

The engine in this Stage 1 Super Z is a one of a kind with twin Holley modified NASCAR 390 cfm carbs sitting on top
of the Offenhauser cross ram intake manifold. I’ve tuned the carbs to produce great throttle response and you
will find the engine to pull strong when you open all 8 barrels up! The camshaft chosen for our Stage 1 engine
package offers you greatly improved hp while still being fine to use on an AC equipped vehicle. Long tube headers
and a true dual exhaust keeps things following out easily.

To keep things nice and cool always, I’ve installed a Hayden severe duty fan clutch and a 4 core hd aluminum
radiator. The factory AC system had an upgraded compressor installed and the system was filled with the new 134
refrigerant. All under hood areas were cleaned and painted the correct factory trim black color and even the hood
hinges were sprayed in a color that replicated the factory look to them.

The BW ST10 4 speed manual trans has been rebuilt and upgraded/modified with the gears that were used in the ’80
and up Z28s. First gear now is the super low 3.42 ratio which makes it great for getting off of the line. The
differential is a single trac and has been improved by installing a set of 2.73 gears to lower the engine rpm at
hwy cruising speed. Now with the super low 1st gear in the trans and hwy gears in the rear, it is great off of the
line while being a pleasure to drive for extended periods on the hwy!

The brake system is all working properly and the font pads have been upgraded to ceramic to reduce dust build up on
the wheels.

The 15 x 7 factory aluminum wheels were cleaned, painted the correct gold and then polished. The tires still have
good tread left on them to enjoy some more miles of driving.

The floor has had new underlay insulation and carpet installed along with new sill plates. Rear shelf package tray
seat covers and door panels have all been replaced along with the headliner and sun visors – but that was 6 years
ago so not brand new at the moment. All dash gauges work properly. A new high power radio and speakers were
installed in the rear shelf and in the center front area.