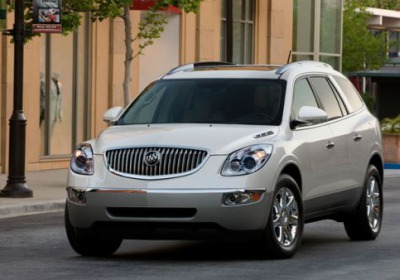 The summer of 2010's recall hit parade continues unabated today, with General Motors having just announced that it is asking 243,403 owners of its 2009-2010 Lambda crossovers to bring their three-row haulers in for inspection. The culprit? Second-row seat belts in select Buick Enclave, Chevrolet Traverse, GMC Acadia, and Saturn Outlook CUVs have "failed to perform properly in a crash."

According to GM, a second-row seat-side trim piece is to blame, as it can impede the upward rotation of the buckle after the seat is folded flat. As a result, if the buckle makes contact with the seat frame, cosmetic damage can occur, potentially requiring additional force to operate the buckle properly. So far, no great shakes, but in the process of applying that additional force, the occupant may push the buckle cover down to the strap, potentially revealing and depressing the red release button. As a result of this, the belt may not latch, or in certain cases, it may actually appear to be latched when, in fact, it isn't.

GM will be working with the National Highway Traffic Safety Administration to administer the recall, which will see owners receiving letters beginning later this month to schedule an appointment for a no-cost inspection and repair of the affected belts. Click through to the jump for more details. Top tip, NOS879!

DETROIT – General Motors is voluntarily conducting a safety recall for 2009-2010 models of the Chevrolet Traverse, Buick Enclave, GMC Acadia and Saturn Outlook to inspect second-row safety belts for damage that in rare cases could make an occupant think the belt is properly latched when it isn't.

There are 243,403 vehicles involved in the recall, the majority in the United States with several thousand exported vehicles in Canada, Mexico, China and Saudi Arabia and small populations in other countries

Some vehicles may have a condition where the second-row seat side trim shield restricts the upward rotation of the seat belt buckle when the seat back is returned to a seating position after being folded flat. If the buckle makes contact with the seat frame, the buckle may receive cosmetic damage as the seat back is being returned to its upright position. When this occurs, the customer may notice that additional effort is required to return the seat to a seating position.

But if sufficient force is applied, the buckle cover could be pushed down the strap, exposing and partially depressing the red release button. The seat belt release button may not travel as much as designed when depressed. The buckle may not latch or unlatch and may appear to be jammed. In rare instances, the buckle may appear to latch when the latch mechanism is not fully engaged.

"Because of the potential for a false-latch condition, we want customers to return their vehicles to have the recall repair performed as soon as possible," said Jeff Boyer, GM executive director of safety.

Owners will begin receiving letters this month to schedule appointments with dealership service departments for a no-charge inspection and repair of the second-row belts.

About General Motors – General Motors, one of the world's largest automakers, traces its roots back to 1908. With its global headquarters in Detroit, GM employs 208,000 people in every major region of the world and does business in some 157 countries. GM and its strategic partners produce cars and trucks in 31 countries, and sell and service these vehicles through the following brands: Buick, Cadillac, Chevrolet, GMC, Daewoo, Holden, Jiefang, Opel, Vauxhall and Wuling. GM's largest national market is China, followed by the United States, Brazil, Germany, the United Kingdom, Canada, and Italy. GM's OnStar subsidiary is the industry leader in vehicle safety, security and information services. General Motors acquired operations from General Motors Corporation on July 10, 2009, and references to prior periods in this and other press materials refer to operations of the old General Motors Corporation. More information on the new General Motors can be found at www.gm.com.