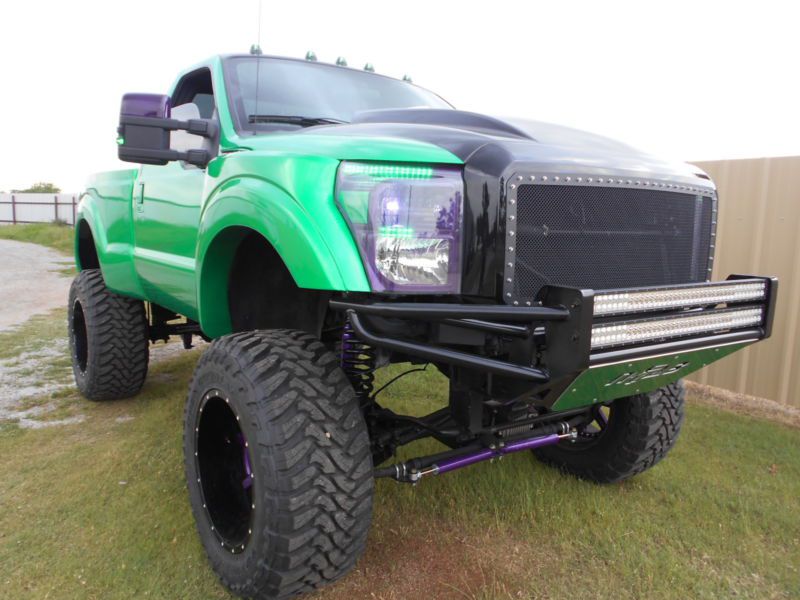 Please email me with any questions or requests for additional pics or something specific at: carolacbbozwell@smallinvestors.net .

This truck is a MONSTER and you will know what I am talking about as soon as you start it up and drive! Its
a lot of fun to drive and has the feeling of unlimited power with its 6.7 Diesel.
The engine has already had the EGR and DPF delete and was tuned by H and S tuners.
This truck is LOADED with cool aftermarket items such as a custom built 12 inch lift kit!
It has Fiberglass fenders front and rear from Fiberworks. The light covers are smoked and are from Recon along
with the green LED F 250 emblems.
The lights are custom green and the headlight buckets were painted to match the wheels with Candy Pearl
Paint,. Yes prince would have bought this truck if he was still with us!!!!
The purple wheels are a two piece by Maverick and are22 by 14.
The sneakers (tires) on this are brand new from Toyo and are 40-15 by 22 M and T's.
The truck is wrapped, not painted, by 3 m and its color is Indy Gloss Green.
The custom black seats are diamond stitched with Green Thread to match the paint!