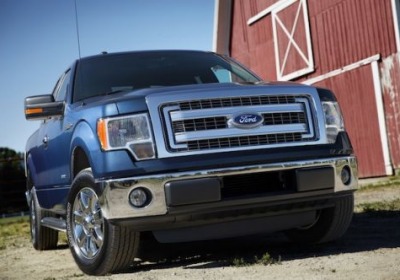 With July 4th just around the corner, what better time could there be for Cars.com to announce that the Ford F-150 is the Most American car of 2013? This may be especially true since it was the Toyota Camry, a car produced by a company based in Japan, that had held the top spot from 2009 to 2012.

Cars.com compiles its Most American list by considering the amount of parts each vehicle uses that come from America, where it's final assembly takes place and how many units per year are sold. "While the assembly point and domestic parts content of the F-150 didn't change from 2012-2013, vehicle sales are responsible for bumping the F-150 to the top spot," according to Patrick Olsen, Editor-in-Chief of Cars.com.

As far as automakers go (as opposed to individual models), Toyota retains the top spot it held in 2012, with General Motors, Chrysler, Ford and Honda (in that order) rounding out the list. The motivation behind this list each year, according to Olsen, is "to help car shoppers understand that 'American-Made' extends beyond just the Detroit three" and because "a study we conducted in 2012 indicated that 25 percent of shoppers surveyed preferred to buy American."

It should be noted, however, that Cars.com isn't the only group with an American-made study, and not everyone agrees on the methodology used. In fact, a highly detailed study earlier this year by American University's Kogod School of Business found that the Lambda CUV triplets from GM are the most American-made nameplates, and there isn't a single vehicle from a Japanese automaker anywhere near its top ten.

Feel free to browse the press release below to see how the full top-10 list breaks down.

CHICAGO – Cars.com, the premier online resource for buying and selling new and used cars, announced today that the Ford F-150 has topped the site's American-Made Index. This is the first time in four years that a domestic automaker is once again the "Most American." Prior to the F-150's top spot, the Toyota Camry topped the list from 2009-2012. The list is determined by analyzing three data points; domestic-parts content (percentage of vehicle's parts produced in the U.S.), final vehicle assembly point and vehicle sales.

"Strong sales and 75 percent domestic-parts content propelled Ford's popular F-150 to the top of the index for 2013, a rank it held from 2006 to 2008," said Patrick Olsen, Cars.com's Editor-in-Chief. "Ford's top ranking this year is a good indicator of how pickup trucks are dominating auto sales so far in 2013, and how the domestic automakers are bouncing back. While the assembly point and domestic parts content of the F-150 didn't change from 2012-2013, vehicle sales are responsible for bumping the F-150 to the top spot."

While the Toyota Camry is no longer the highest ranked on the list, Toyota still remains the brand with the greatest number of vehicles ranked. As was the case in 2012, the list remains an even split between foreign-owned and domestic-owned automakers, with five domestic brands and five foreign brands on the list. In addition to Toyota's four vehicles on the list, General Motors has a total of three. Chrysler, Ford and Honda each have one vehicle on the list.


"Buying American isn't necessarily the key decision maker for every car shopper; however a study we conducted in 2012 indicated that 25 percent of shoppers surveyed preferred to buy American," said Olsen. "The American-Made Index is meant to help car shoppers understand that 'American-Made' extends beyond just the Detroit three."

For full results and more information about the 2013 Cars.com American-Made Index, visit www.Cars.com or blogs.cars.com.