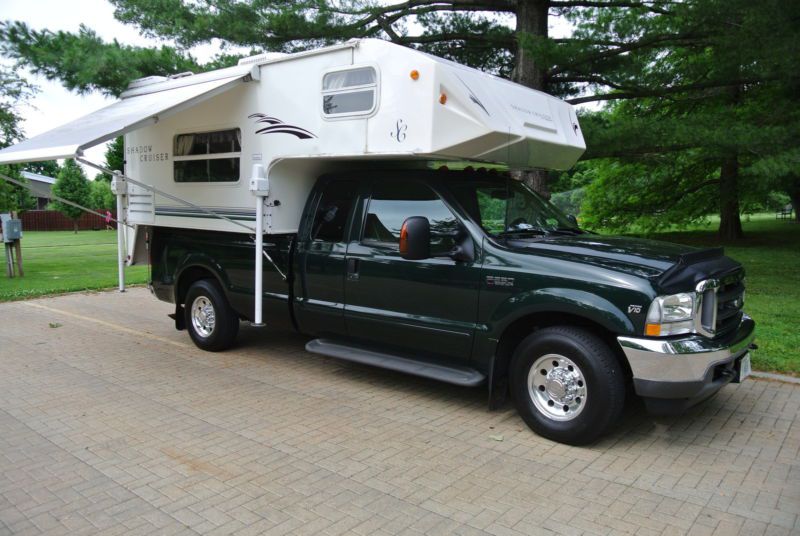 He bought it new and at the same time, bought the Shadow
Cruiser Camper by Cruiser RV Corp.
Always clean, well maintained. Other than a
small scratch on the rear side of the right front fender, I could see no damage. The Camper is the same way. They
both look like they have hardly been used.
REGARDS THE TRUCK: 62,300 ACTUAL miles, Automatic Transmission, Cruise, Tilt, Cassette & CD, Chrome wheel, Rear
step bumper, 2" Hitch, K&N Lifetime air filter, running boards, power locks, windows & mirrors. The cloth interior
shows little signs of wear. The tires show about 80% wear left on them. The package includes a black fiberglass
cover for the bed when you are not hauling the camper.
REGARDS THE CAMPER: 2003 Shadow Cruiser. Vin: 1C9ESH00X31736389. (mfg. 10/2002) Hot Water heater, microwave,
exhaust fan, stove & oven, bathroom with sink & shower, toilet, radio, dining table, fire extinguisher, and awning.
The attached awning is made by CareFree, Freedom III, Omnistor Awning. This camper came with manual legs, but Joe
added electric legs at a cost of $2200.00