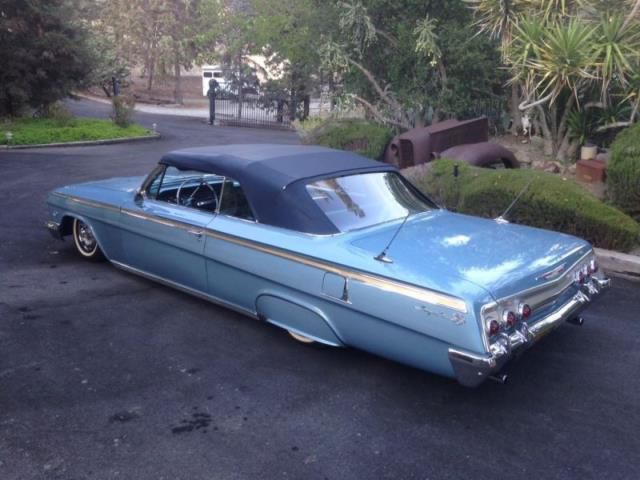 “This beautiful car convertible custom is ready to drive & show. The car is loaded with several fact. options including the following; P/S, P/B P/W Air Cond., 4 original 62 beautifully restored Seat Belts, Front Grille Guard, Dual Rear Bumper Guards, Dual Rear Antennas, Dual Side Mirrors, Gas Door Guard & Compass. Many of these options are NOS or Hi-Quality Reproduction or Re-Chromed in some cases. The original 327/300 rebuilt engine has the double-humped hi-performance heads. It has the smooth shifting 350 turbo transmission yet it maintains its factory look. It has a very high-quality air-suspension that works flawlessly. In addition, it has a very hi-quality, expensive sound system costing over several thousand dollars. The paint is slick and beautiful. There are many chrome engine parts suspension parts. The underneath is clean and very nice. Tires are 15 radials that are in like-new condition with Disc Front Brakes. The exhaust sounds great. A/C blows cold. Priced right.”