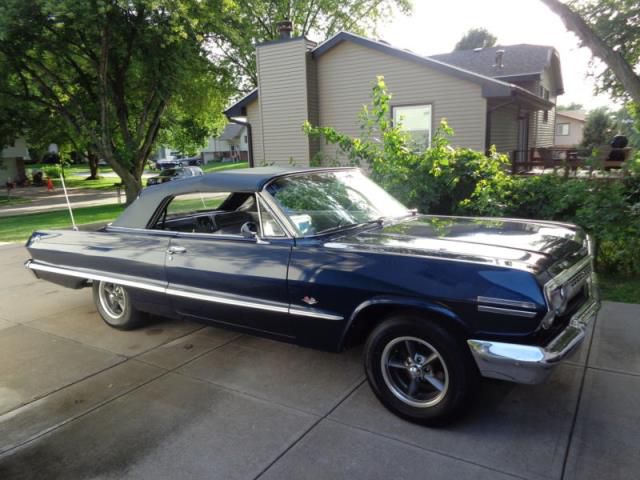 up for grabs is my super nice 1963 Impala convertible. this car is seriously clean inside , out, and under. it is a 4 speed manual car to top it off! 283 v8 extremely clean and healthy. power steering / brakes. solid frame no rust on car. your typical surface stuff underneath that comes off is about it. any body work in past seems to have been done right, solid car! reads just under 34k but will not claim to be original by any means even tho it could prob pass for it by looks.. front disc brakes are great. very minor flaws if any to speak of would include couple light scratches on paint or some ware on trim piece or 2. but basically just saying that to not claim the car is perfect. it is top notch driver quality and some would even say show quality, if you hit a show it will be admired by all thats for sure. this car runs, drives, stops, shifts, etc exactly as it should. I would take this car anywhere. also has chrome tilt steering columb and chrome dash around cluster. has kick panel speakers that are hooked up to the og tube radio. anything custom on this car is very very mild and extremely tastefull. interior is a nice silver with blue carpet which is basically like new. no flaws I can even think of.top is brand new with plastic window in perfect condition as well as the silver matching boot for top. as of now the top just stop retracting, it still gos up but doesnt want to go down with the switch. I will try to address this if I have time. it should be very simple fix. other than that I can literally not think of anything else on this car that does not work. all dash gauges, lights, horn, radio, e-brake, signals, window rollers, basically anything you could ask about it works! fel free to ask any questions id be happy to help. this car is serious and whoever lands this thing will be very pleased. this is coming out of my personal collection and that does not happen often.