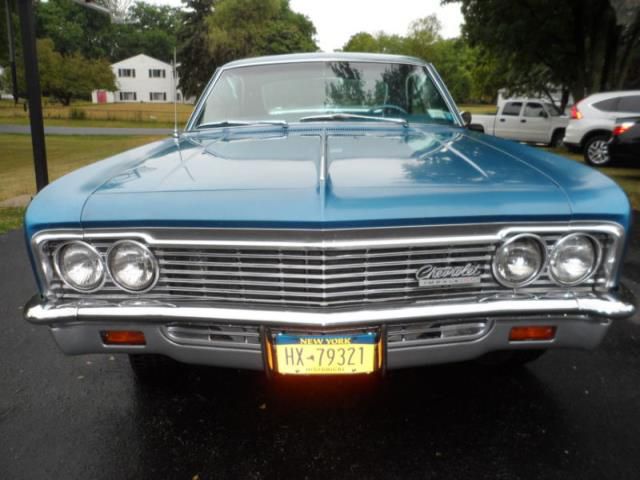 This is a rare car as most Impala SS came with a 327 CI which is a L30 car, however, this is a Impala SS 396 CI all original numbers matching L35 car. The Impala comes with its original drive train which is 396 CI engine, 400 turbo transmission and 3:73 12 bolt posi - rear end , factory SS tach gauges, and she has power steering and is a pleasure to drive. This car came out of California so there is NO RUST, NO DINGS, NO BONDO, and the interior is in MINT condition, everything works on the car except the clock. The Impala had 1 repaint about 20 years ago and there are a couple of spots where there was touch up. Watch the video. Recent upgrades were all brakes(drums, wheel cylinders, hold down kit ) , The original radiator just got new core and reinstalled, brand new 2 1/2" flow master exhaust system (which sounds Awesome) new custom radio with new speakers (still have the original which comes with the car, new Holley 4 barrel carb (still have the original Rochester 4 barrel carb which comes with the car, new plugs and wires, I know I'm probably forgetting something.
PLEASE EMAIL ME FOR FASTER RESPONCE AT : franklinysbabette@laposte.net