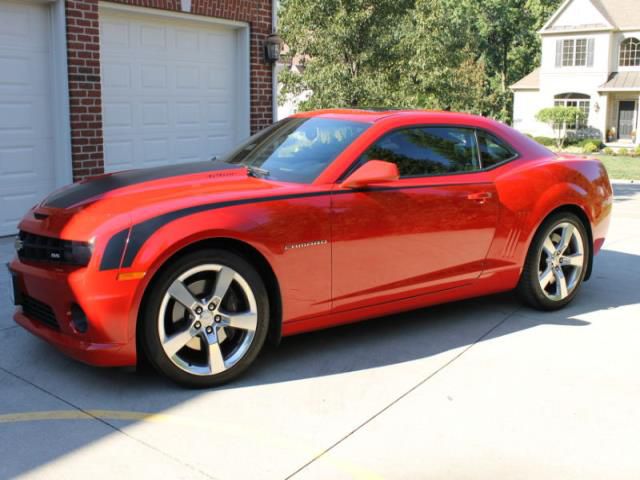 You are looking at my 2011 Chevrolet 2SS / RS Red Camaro complete with Black Center & Hockey Stripes. It has been babied its entire life and only has 17,800 original miles. It has never seen rain or snow. It is quite simply in excellent to near mint condition. There is not a single issue or scratch that I am aware of. It is a 6 speed manual transmission complete with a special Hurst shifter that makes it easy and fun to blow thru the gears. It has 426 HP and there are even matching black decals on the hood scoop that show the 426HP. It is red with the black stripe package. It also has the rare hockey stripes that add to its beauty. Leather interior seats. The interior is immaculate. I do not even think the other 3 seats have been sat in! It is equipped with tons of features including a sunroof, satellite radio, bluetooth, heads up display, 5 spoke alloy wheels, and so much more! It is not technically an RS model but it has almost every option of the RS package included. The only one missing that I am aware of is the special Halogen light covers on the front. It is 100% original with the exception of an exhaust/muffler tweak that makes it a bit louder than normal. It is an easy switch back if so desired. I have the 2 original Chevy mufflers if you wish to reinstall it back to factory specs. But I think you will like the extra growl. The carpet is in absolute mint condition and so are the original floor mats. I have rubber Camaro mats currently protecting the original floor mats. It currently has an extended warranty that I paid quite a bit for. It is good until 12/16/2021 or 85,000 miles. So it is totally covered for 5 full more years!! This plan is awesome too. It even covers wheels & tires thru 2019. The plan will replace the wheels or tires even if you curb them!! Just think how much that will save you! I am building the cost of this into the price. If you do not want it let me know and I will cash it out and subtract $500 off the final price. In my opinion it is the best $500 you will ever spend. It also currently has a LIFETIME SUBSCRIPTION TO SIRIUS/XM SATELITE RADIO! That cost me quite a bit back in the day and it is a feature they do not offer anymore. I will include the lifetime subscription for an additional $500. That is the cost of just a few years but for your lifetime! I live in Columbus, OH. I actually know some pretty good car transporters who can haul from OH to CA for around $500-$700. You are ultimately in charge of arranging pick up and transport. I will accept cash or bank cashiers check. We can also work out other payment plans if so desired. Clear title in hand.