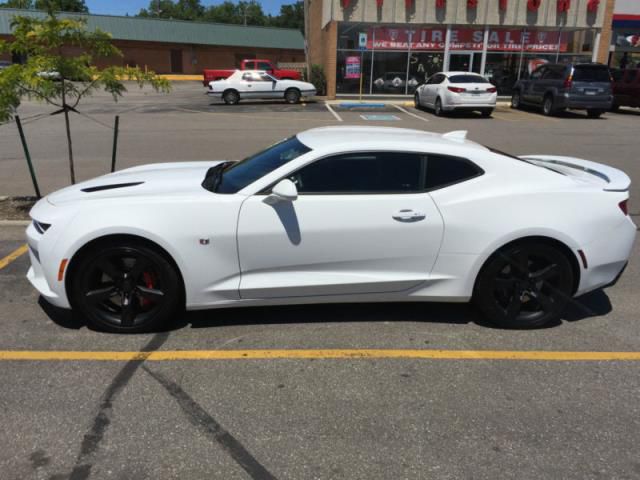 I purchased this incredible Camaro 2SS in March and enjoyed it over the Summer. Its got the Brembo brake package, adjustable muffler tuning, Bose Stereo with subwoofer, every option except automatic transmission and sun roof. I elected not to add the stripes, and the combination of pure white car, matte black rims and the red brembo brakes is a head-turner. Not a mark or scratch on this car. Factory maintained (a simple oil change, with another free one coming). Balance of MFG warranty. This car is barely broken in. $50,000 sticker. My loss is your gain. Also, I have the gun metal factory 20 wheels (never used) as well as the matte black 20 wheels I purchased (as pictured). From Car & Driver: Besides the Camaro’s ability to depart C/D World Headquarters at the end of a workday sideways in a plume of glorious smoke, you mean? Truth is, we’ve found a lot more to like. The most complimented items in our long-term Camaro’s logbook are power and ride comfort. That’s the Chevrolet Camaro SS in 2016: stupid fast and strikingly comfortable. The next most admired attributes? Handling and chassis composure. This Camaro can abbreviate apexes better than its legacy implies. Road trippers took to the Camaro’s long-distance comfort keenly, noting that both its seats and its suspension offer all-day capability. It’s hard to not like a sports coupe that’s fast and comfortable, disregards midcorner bumps, and demonstrates big grip.
For further questions email me : porterwilliamfsg@gmail.com