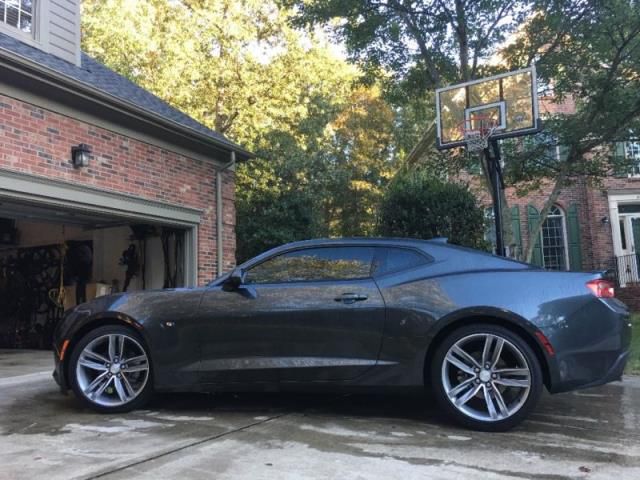 eMail me for more details : dinagrantlj2@gmail.com

** 2016 Camaro RS!! ** ** Brand new condition inside and out! ~700 miles **What: 2016 Chevrolet Camaro RS. Only ~700 current miles! $33,335 MSRP with Original Window Sticker. All Books, both Keys/Fobs, etc. As new. Literally as flawless as the day I bought it. Non smoker, zero accidents (obviously). Ive set the BUY IT NOW price over $6,000 under MSRP for a quick sale. Options:RS Package: if you dont know what this is, the easy way to explain it is that its an SS but with the 335hp V6 instead of the V8. It has the same aggressive looks, grill, rear spoiler, 20 wheels, front splitter, LED lights, etc. With a 335hp V6 it runs 0-60 in 5.1 seconds and the 1/4 mile in 13.7.Technology Package: 8 Touch Screen with AppleCar PlayHID Headlamps with LED Signature - LED Tail lampsPower Glass SunroofBose Premium Stereo (sounds amazing!)8-speed Automatic Transmission with Sport, and Touring SettingsIncludes all original books, manuals, both keys and key fobs, window sticker, etc...Keyless entry with remote start as well as push button startLegal 35% professional window tint Any lowball offers will automatically be declined so dont bother. Youll be hard pressed to find an SS for much less than the $42,000 range, and the RS as you can see is in the $32k-$38k depending on options. Car and Driver has tested the RS with the 8-speed auto at 0-60 in 5.1 seconds and a 13.7 in the 1/4 mile. Im not a racer, but i do appreciate the power when needed. On top of this, its rated at 28mpg on the freeway. 87 octane is recommended unlike the Premium that is required in the SS. I bought this brand new at the dealer 2 months ago and have put ~700 miles on the car. I work from home so i dont use it to commute. I previously was looking to buy a Corvette and changed my mind after all the amazing reviews on the new Camaro. A Corvette with a back seat as they say. Im still itching for a Corvette unfortunately! Im in no hurry to sell this, but at this price, its going to be very hard to pass up. Theres hardly a car out there that looks this good, is this quick, this amazing of a handler (now on the Cadillac ATS platform), with this gas mileage for anywhere near this price.