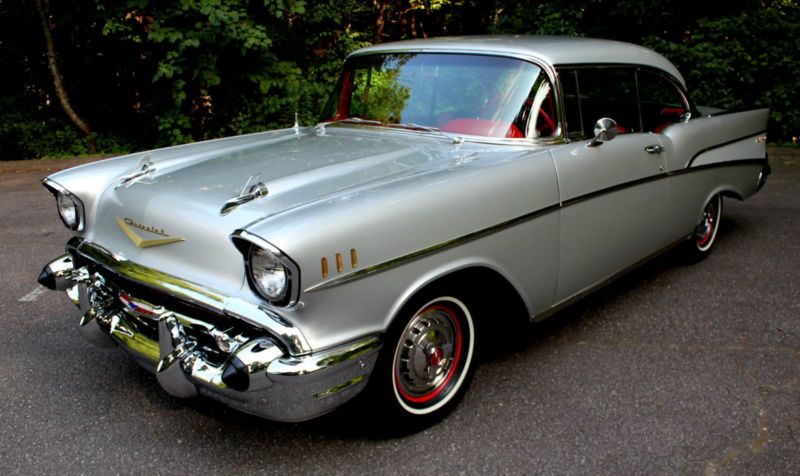 Chevrolet Bel Air Sport Coupe 1957
A true Classic and a piece of history.
This beautiful Chevy Bel Air was restored about five years ago in Pickens County, SC at 55,000 miles. After
purchased the current owner replaced the tired engine and transmission with a350 V8 with electronic ignition and a
350 turbo transmission.
This car was originally a two tone car with a white roof over silver. During the restoration it was decided to
make it a one tone car in beautiful silver metallic. The entire interior was replaced and is spectacular in all
of its RED and black glory. The shine of the dash, the clear plastic on the gauges and transmission indicator tell
a good story of how nicely this car is done.
The paint job on this car is beautiful and shows very nicely as does the bright-work.
The car has fender skirts that are not on the car at this time. The engine also has the benefit of an aluminum
radiator and electric fan so it is ready for those hot summer days. Power steering and a really big wheel make this
an easy car to drive.
Since this was restored it has only seen rain two times and luckily it was in the driveway so
The bottom stayed clean.
This is an opportunity for someone to purchase a classic that can be driven and enjoyed.