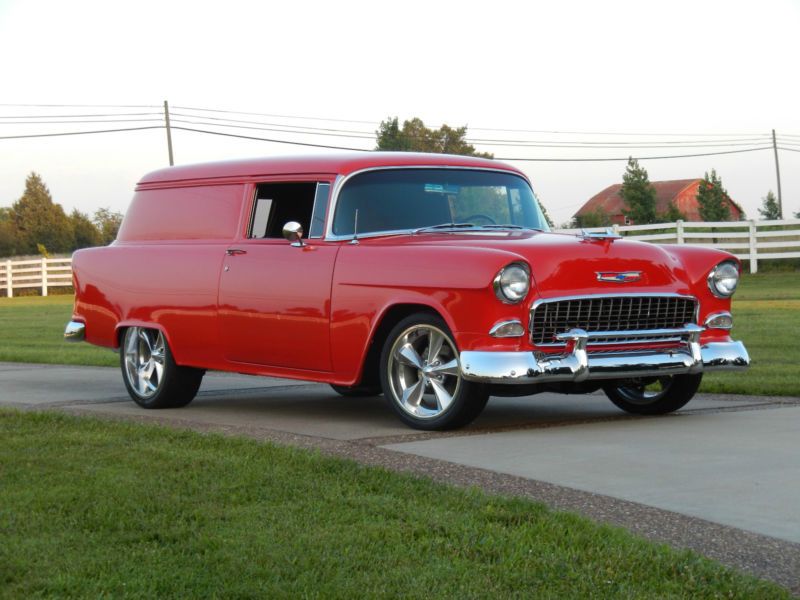 What else can we say about this 1955 Chevrolet Sedan Delivery Wagon except that it is absolutely stunning!
Tri-five Chevys are a core car of the classic car hobby, and this specimen is the epitome of why they are. From
factory correct builds to wild customs and everything in between, the possibilities are endless with cars like this
When this car hits the road it stands out with a nice glossy finish of bright RED paint. That vivid paint looks
excellent and covers smooth fenders. but when you have a car like this you Can Do Some bragging about how cool it
is; you're bragging about how cool it is! One of the neatest things about this car is that bright work that accents
the Red paint very nicely. The exterior remains in stock form with nothing wild or suggestive screaming at you,
which is a good thing. The body is straight and solid and this Chevy makes the perfect candidate for your next
weekend cruiser.
1955 CHEVY Sedan Delivery
NUT AND BOLT rotisserie restoration
350ci Crate Engine
4-speed 700-R4 Over Drive Transmission
Tinted glass all around
Gas door guard
bumper guards
dual horns
This 1955 Wagon has received a nut and Bolt rotisserie restoration, No expense spared.
This 55 Chevy drives and handles like a dream
(LIKE NEW)
(TAKE A LOOK)
NEW Leather INTERIOR
NEW custom WHEEL
New SMALL BLOCK
700 R4 OVER DRIVE
POWER STEERING
POWER DISC BRAKES
CUSTOM A/C & HEAT
New cross flow cooling system
NEW custom STEERING WHEEL
Stock GAUGES
Painless wiring
Power Steering
ALL OTHER SUSPENSION IS FACTORY
ALL CHROME AND STAINLESS LIKE NEW
ELECT-WIPERS
TOO MUCH TO LIST (MUST SEE)
LOOK UNDER THIS 1955 CHEVY Wagon IT IS NICE.
THIS 1955 CHEVY LOOKS AS GOOD AS THE DAY IT WAS MADE . THE PAINT IS SLICK AS GLASS AND THE BODY IS LASER STRIGHT
ALL THE BODY PANELS LINE UP AS THEY SHOULD.
THIS 1955 CHEVY RUNS AND DRIVES LIKE A DREAM. NOTHING WAS OVER LOOKED THIS 1955 CHEVY IS READY FOR ANY SHOW.
(A MUST SEE AND DRIVE CAR) (YOU WILL NOT BE DISSIPOINTED)