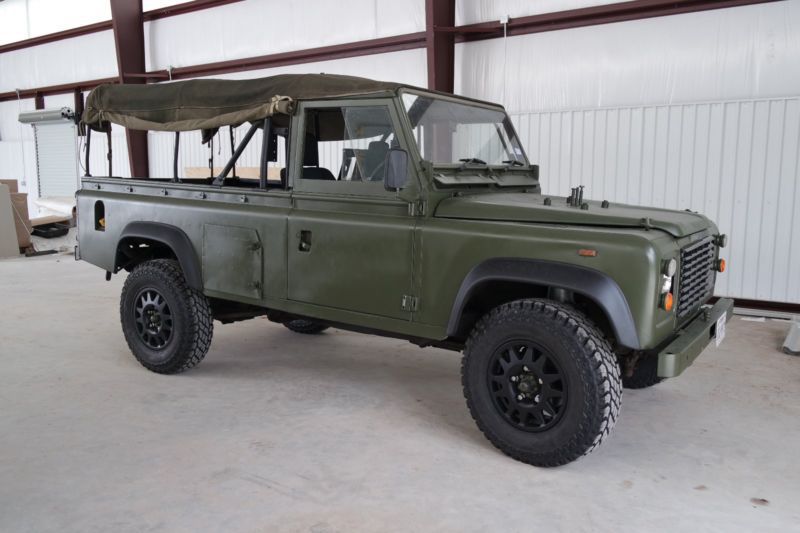 Feel free to ask me any questions about the car : deettadbbelski@poshtarts.com .

This is a clean, rust free right hand drive ex-MOD Land Rover Defender 110. It was built for the British army and
was put into service in 1987. I bought it direct from the Ministry of Defense and shipped it to Houston. A clear
Texas title is in hand and will come with the purchase of the truck. This 110 is the perfect hunting truck, beach
cruiser, or even a daily driver.
Many Defenders like this one were restored and upgraded by the UK Army between 2007-2008 to extend the service life
of the fleet. Upgraded equipment included new Safety Devices, new Exmoor Outlast Seating, and Wolf heavy duty
wheels.
The engine is Land Rover's 2.5 NA Diesel and the transmission is the LT77 5 speed. The engine was rebuilt by the
Ministry of Defense and runs, drives, shifts great.
These trucks are 4x4 with locking differential. They do not have power windows/locks, ABS, NAV, etc. They do have a
bulletproof diesel engine (used in Land Rovers for a decade), transmission, brakes, and seats. Everything you need
to get somewhere fun.
This truck has a spray in bed liner from front to back on the inside (installed by local Chevy dealer installer),
Land Rover floor mats, new suspension parts, genuine MOD rifle rack, fresh paint, all new filters and fluids, and
more. Only the first two
pictures show the rig with the new tires/wheels.
Please come by to see the truck in person.