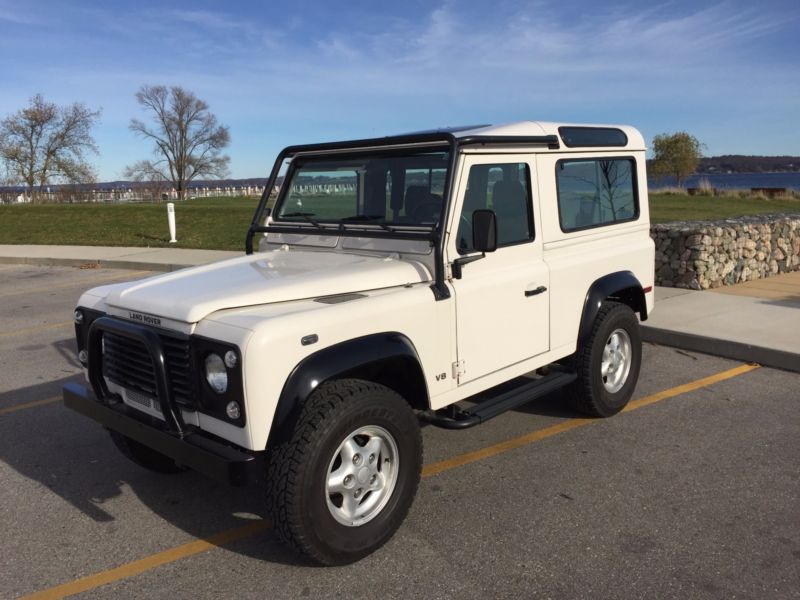 More infos regarding my car at: lakieshalggilboy@v8man.com .

1997 Land Rover Defender D90 for sale. $59,000 firm. Imported 3.5-years ago, inspected and bonded to meet all of
the safety requirements. This is the perfect Defender for an owner that plans on driving and enjoying their D90 --
not just sit on it afraid to drive it because of an old, high mile engine.
The vehicle has 86,000 original miles on it. However, we've upgraded the engine from 4.0L to a new 4.6L Land Rover
engine with an extra 40hp. (The old engine, like many Land Rover 4.0L engines, starting to have coolant leaking
into the oil making it a lighter color. Instead of risking a rebuild of the engine, we decided to go all out and
put an upgraded, better engine in the Defender.) The upgraded engine has 300 miles on it and just had its first oil
change, so it's ready to go. It's running more smooth and cool than the 4.0L making this a more reliable, lower
maintenance BLAST of a vehicle to drive. :) Note: In the engine photo, the 4.0L is still shown as the mechanics
said it uses the same size connector -- but the new engine is underneath it).
I purchased this D90 from the owner of a dealership who was the one that did all of the work importing the vehicle
and getting it bonded. He drove it for ~5-months and sold it to me as I have been looking for one in great
condition for 12-months.
* Upgraded engine to 4.6L professionally installed by the best exotic mechanics in town
* Custom built sound system. It includes 4 Focal speakers, 2 Alpine amps, 2 Focal subwoofers with custom built
boxes positioned in the back behind the sideways facing seats (far better positioning than on the rear door like
you'd normally see). Bluetooth and hands-free calling work just like a new, modern vehicle via your iPhone or
Android
* Brand new OEM side steps in mint condition (see new photo)
* Stainless steal screws holding the door hinges on. (No idea why Land Rover didn't make them stainless! See new
photo).
* Rust removal
* Newer tires
* Interior brought back to near perfect
* Regularly detailed the vehicle, annual maintenance for the 3-years I owned it.
This '97 Defender is the only year where an automatic transmission is available along with A/C (luxury!). A/C works
great.
The body is in fantastic shape. The white aluminum is perfect and is the best Defender color, having the most clean
lines and contrast against the black roll bars and tires. There is very minimal rust underneath mostly near the
muffler, which is in strong shape and cheap to replace if needed int he future. The sides beneath the doors and the
rear are in fantastic condition.
The interior has been cared for, replacing things like new carpet in the back, new fabric on the ceiling, etc...
Having the rear seats face each other in the back with the audio system makes this an extremely fun, social
vehicle. All windows are perfect. Sun roof is in perfect condition with no leaks.
This Defender is one of the cleanest D90's on the market with 86,000 original miles.