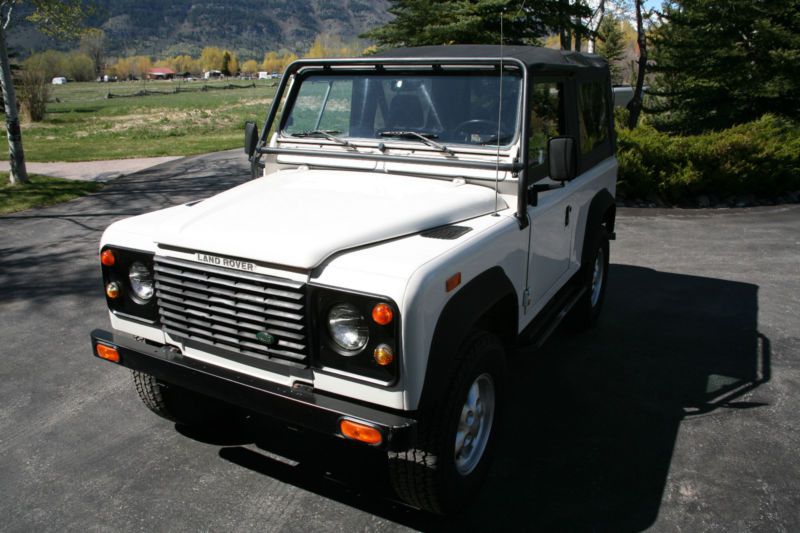 If you have any questions or would like to view the car in person please email me at: tomasatyyobst@ukprint.com .

Rare 1994 NAS Land Rover Defender 90 Soft Top
Purchased this 1994 Defender 90, #902 in May 2001 in Salt Lake City with 41,670 miles. Over the last 15 years,
usage has been light as today there are only 80,267 miles. It has been used as a "mountain town convertible,"
driven primarily in the summer and almost exclusively on paved and gravel roads. The vehicle has been serviced as
needed by the same mechanic over the last 15 years. The Land Rover is in excellent condition for a 22-year-old
vehicle and runs very well. The Defender has been stored in a garage and sports a five-speed manual transmission,
high/low four wheel drive, waterproof seats, roll cage, rear lamp cages, receiver hitch, and is really fun to
drive. Major maintenance over the last several years has included: new rear shocks in 2007, new Firestone
Destination A/T LT 265/75R16 tires at 63,348 miles, front brakes in 2011, fuel pump in 2013, fuel temp sensor and
ignition module in 2014 and, just recently, a new starter, crank sensor, and plugs. While it runs great, of late
it has exhibited a reluctance to start on occasion; this has been the source of the recent work. It has been
thoroughly inspected, and my experience is if it does not start, let it sit a bit and try again. In the last 37
attempts to start since the recent work, it has started 35 times. It runs great. A Sony AM/FM/Cassette Player is
located in the center console that also offers storage and drink holders.
The Defender carries a clean Carfax Report with no reported bodywork. Under my ownership the Defender is accident
free, all original parts other than maintenance described above and has never been smoked in. The Land Rover
Defender 90 is a bona fide icon, only imported into the US from 1994 until 1997, and now production in Europe has
ended. A true collectors item.
Owners notes:
The seat back adjustment levers have never worked well as long as I have owned the Defender. The forward back
adjustments work fine.
The dashboard gauge lights are very dim and can be hard to see instruments at night; the gauge brightness
adjustment does not work and never has.
The plastic casing on the rear seat seat belt receptors are cracked and taped together (see photo) but are
functional.
The body is in excellent condition; there is a small dent in front of the passenger door (see photo) and a few
scratches.
The label sticker for the airflow control, hot/cold, floor/defrost is missing (see photo).
There is some rust on the driver and passenger door hinges and spare tire carrier; it does not impede their
function (see photo).
There is also some rust under the driver floor mat (see photo).
The Defender burns a quart of oil regularly and drips a bit (fairly typical).
The soft top is the original and was left off most summers (vehicle was kept in a garage). It is very difficult to
attach all the snaps (I usually do not), and there are tears in two of the plastic windows that are taped (see
photos).
The rubber mat in the rear cargo area was replaced a couple of years ago, but has developed a tear at the right
wheel well (see photo).
Floor mats are new a couple years back.
Other:
A receiver hitch mounted bike rack is available if the buyer would like it. It was a special order bike rack to
accommodate clearing the spare tire. It has been well used and is included free with the Defender.