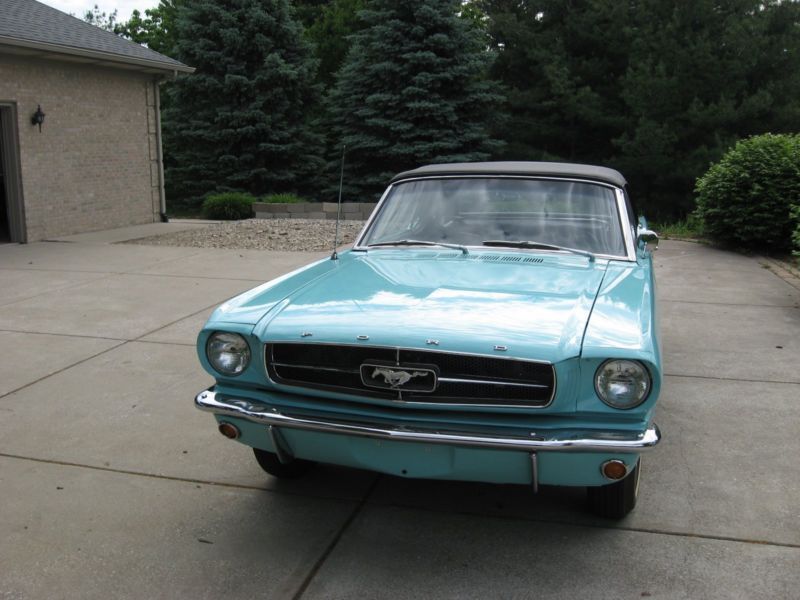 This 1965 Mustang convertible was made in Dearborn Michigan and carefully restored with authentic parts to a
precise level of detail. It belongs to the wife of a Ford engineer who wanted the restoration to be done the best
way possible using all stock parts. Bare metal rotisserie process was used. Buyer will see attention to detail
throughout the car. It has the "A" code 225 horsepower engine, 4 barrel carburetor and 4 speed transmission. Color
is Tropical Turquoise which is rare and used only in 1965. Interior is black vinyl with bucket seats. Hoses, glass
(except windshield), battery and oil filter all have Ford logo.
-VIN 5F08A359087
-Less than 100 good weather miles since restoration
-Engine, transmission and rear axle have been rebuilt
-Manual convertible top
-Engine block cast number - C5AE-6015-E with cast date code of 4L3
-79400 miles
-Options: power steering, styled steel wheels, AM radio, front seat belts and heater
-6.95 - 14 bias white wall tires
-Axle tag - WDJ C, 3L00, 4MC 906 (believe to be 3.00 open)
-Trans tag - HEH P, 025457 (Ford 4 speed top loader)
Mustang is located about 35 miles north of Detroit. Test drives and inspections welcome.