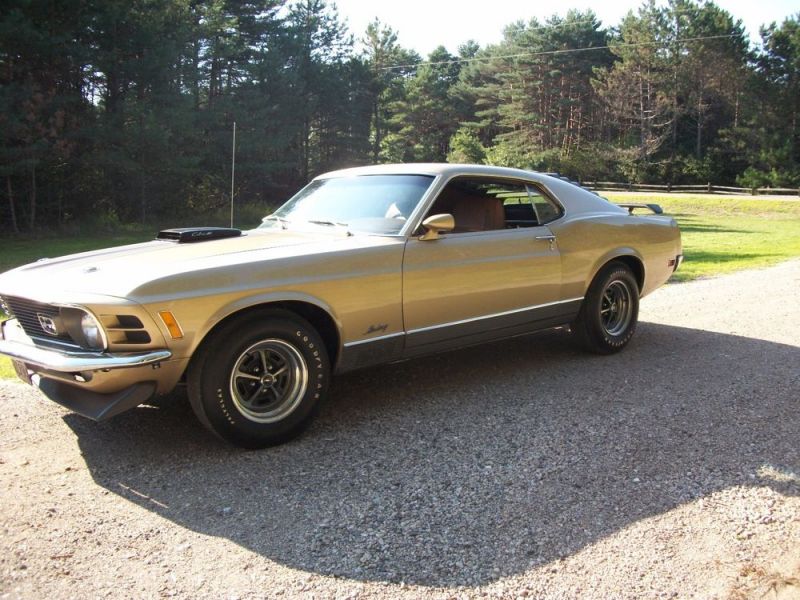 For more pictures email at: cheriecggalizia@freeolamail.com .

Here is a very nicely restored 1970 Mach 1 DragPack car with a 428 Super Cobra Jet engine, 4 speed Transmission and
a 3.91 rear gear (V code). This car was rotisserie restored a few years ago using many hard to find NOS parts and
restored or refurbished original parts. The color is factory Medium Gold Metallic with Ginger interior. This car is
registered in the 428 Cobra Jet registry book page 83. Some of the NOS parts used during the restoration were the
Dash Pad, Front Valance, Front & Rear Bumpers, Grille, Right & Left Fender Extension Moldings,Hood Molding, Tail
Light Chrome Bezels, Tail Light Lenses and Gaskets, Tail Light Trim Panel, Trunk Wing, Chrome Hood Locks, Rear
Chrome Exhaust Tips, Door Handles and a few more smaller items. The underneath of the car is nicely detailed also
and has new Exhaust Pipes and Mufflers. The original engine is long gone but the car has a rebuilt C scratched 428
Super Cobra Jet engine with the LeMans Rods, Super Crankshaft, Super Balancer ect.. It also has the correct
Carburetor, Distributor, Fan, Rev Limiter, Intake Manifolds and Exhaust Manifolds and Shaker, Air Cleaner system.
Inside has a AM radio with a Tape Player and a factory Hurst Shifter. This car has had the same owner for over the
last 20 years and has only 66 miles on it since the restoration was completed a few years ago.