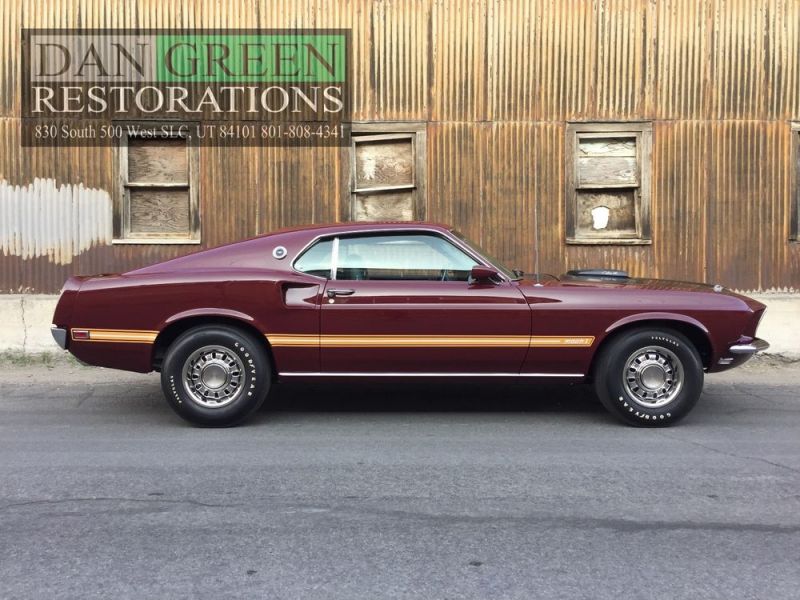 Please message me with questions at: jaymejmmattan@swappers.net .

Dan Green Restorations of Salt Lake City Utah is proud to present for your consideration one of the finest and
meticulously restored 1969 Mach 1's
SEE MORE PHOTOS AT DAN GREEN RESTORATIONS ON FACEBOOK
dangreenrestorations.com
1 OF 1
1969 Ford Mustang Mach 1 "R" code SCJ DRAG PACK
All original numbers matching drive train from the carburetor all the way to the nodular 9" rear end!
Royal Maroon
4 speed close ratio manual transmission
Drag Pack
Visibility Group
F70X14 Raised white letter tires
Sport Deck rear seat
Power front disc brakes
Power steering
Power ventilation
AM/FM stereo radio
Tinted glass complete
Deluxe seat belts with warning light
THIS CAR HAS A RARE "POWER VENTILATION" OPTION NOT A/C
This is one of the most sought after muscle cars ever built!
ENGINE
Completely rebuilt original 428 Super Cobra Jet. Cylinders have been bored, new pistons, crank turned, new
camshaft, valves rebuilt with hardened seats and guides, all new gaskets and seals. Original RARE correct 4 speed
radiator has been re cored.
CARBURETOR
Rebuilt and restored original Holley 4150
TRANSMISSION
Rebuilt and restored original 4 speed
REAR END
Rebuilt and restored 3.91 Traction Lok original nodular 9 inch rear end with new bearings, seals, etc..
SUSPENSION
Completely rebuilt and restored original upper and lower control arms with waffle pattern rivets, steering linkage,
springs, bushings, staggered rear shocks, etc.
BODY
The body was completely disassembled, put on a rotisserie and media blasted. All rust was removed and metal
finished. After the filler work was complete the entire body was sprayed in urethane red oxide primer. The body
and panels were meticulously block sanded several times to achieve perfectly straight panels. The undercarriage
was then wet sanded and sprayed in the exact slop color that came off of the undercarriage duplicating all runs and
drips to recreate exactly what a factory undercarriage looked like. We also duplicated the bare metal spots where
the body would have rested on the assembly line skids. All sound deadeners and seam sealers have been applied at
the appropriate time as to duplicate the original factory process.
The body was wet sanded and sprayed in Dupont Chroma Premier Single Stage urethane with doors installed. The body
color is over sprayed on the undercarriage and other appropriate places.
The engine compartment was then wet sanded and painted semi gloss black along with the rocker pinch weld and wheel
well blackout.
The exterior of all panels have been color sanded and polished to perfection followed by a hand rub.
The body was assembled next and received the restored drive train and suspension.
INTERIOR
The interior features it's ORIGINAL "Comfort Weave" high back seat upholstery, ORIGINAL dash pad, and ORIGINAL door
panels with reproduction headliner and correct carpet. The seat belts were restored by "Snake Oyl".
Contact us at Dan Green Restorations if you are interested in purchasing this Mach 1 or if you would like to
discuss working with us on a project you have!