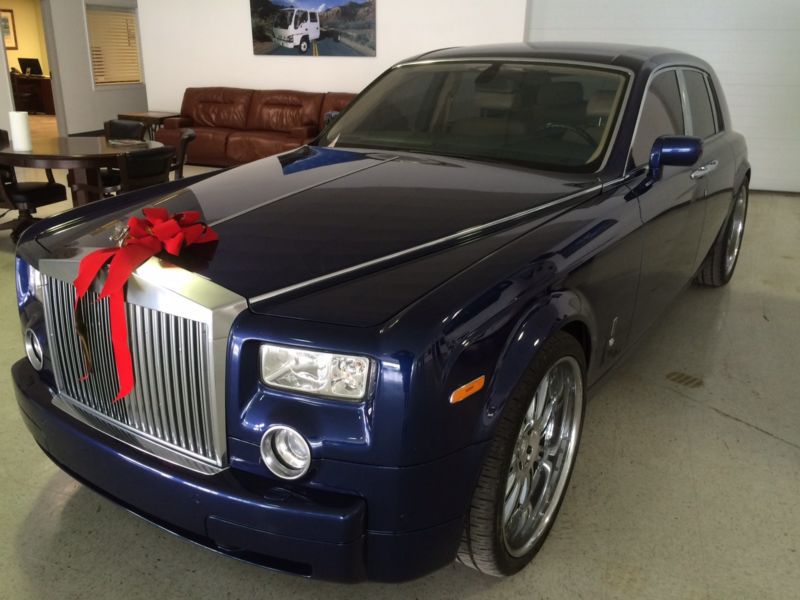 NICE CLEAN ROLLS ROYCE PHANTOM.
This Beautiful Rolls Royce is sitting on custom 24 inch Klass wheels and if that is not your style I have the original factory wheels as well.

Rolls-Royce Phantom Metropolitan Collection wafts into the annals of exclusivity

Limited-edition, hand-built cars are kind of a bizarre thing. On the one hand, people pay umpteen amounts of money for bespoke cars, with the manufacturer adding that iconic descriptor to all its press materials, but then the company goes and produces 20 of the exact same car and sells them as a "special edition." It seems kind of contradictory.
Rolls-Royce must not see it that way, though, as it has just unveiled one of 20 Metropolitan Collection Phantom sedans at the 2014 Paris Motor Show. As the latest member of the brand's Bespoke Collection, the Metropolitan joins the Phantom Drophead Coupe Waterspeed Collection, the Pinnacle Travel and the Ghawwass Edition.
According to Rolls-Royce, the Metropolitan Collection pays "homage to the world's great metropolises" by way of the company's well known craftsmen. The veneers, particularly on the second row picnic table, get extensive attention, with just the table using 500 individual pieces of wood.

A Rolls-Royce Phantom may be the size of an SUV, and the Ghost isn't that much smaller. Still, according to reports, the high-end British automaker is seriously evaluating the prospect of adding a proper sport-ute or crossover to its lineup.
The news comes courtesy of Bloomberg, which spoke to Rolls-Royce chief executive Torsten Müller-Ötvös at the Frankfurt Motor Show last week. Although the rumor of a potential Rolls off-roader has been floating around for several months now, this is the first we've seen of the company confirming the possibility.
The development would follow similar projects being undertaken by rival automakers. Former sister-brand Bentley is preparing to launch an SUV, Jaguar revealed its own concept crossover at the same show, Maserati is gearing up to start production of the Levante and even Aston Martin has considered the idea of a crossover.