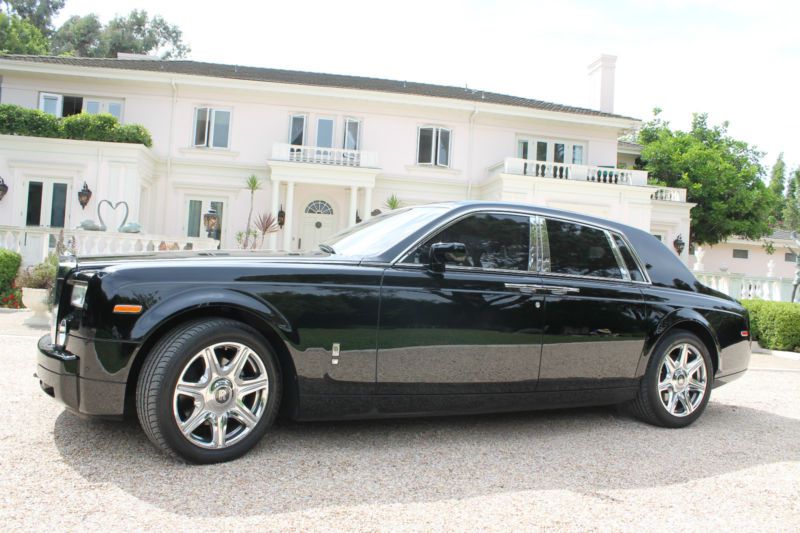 Feel free to ask me any questions about the car : craigcllurvey@southamptonfans.com .

Stunning Midnight Black 2006 Rolls Royce Phantom with low miles. Original MSRP of $354,000 when purchased. It has a
full manufacturers warranty through September 9th!
This awesome "King of All Motorcars" is in nearly new condition and is finished in Midnight Black over Beige Cream.
It comes loaded with nearly every option available including Veneered Instrument Panel($1,100), Crossbanded Elm
Cluster Veneer($2,200), Steering Wheel Spokes($600) & Picnic Tables($1,800). Camera system front and rear($3,300),
Upgraded Premium 21" Chrome Wheels($3,000), Six-Disc DVD Changer($1,500), Slide/Tilt Sunroof, Theatre Config-Lounge
Seat($5,000), Seat Piping($1,400), "RR" Embroidered Headrests($800), and Blue Chrome Interior Package($1,300). Over
$22,000 in Option Upgrades.
There are too many details to list! This car was cared for by Rolls-Royce Dealer for it's entire life and All
Service Records in hand. If you are looking for a Rolls-Royce this car cannot be passed up. When you close the
doors of a Rolls-Royce you are enveloped into another world. Quiet luxury and power to move this sedan at speeds
that will amaze.
If you are searching for the perfect Rolls-Royce with a rare color combination this is your car. No expense was
spared in the maintenance or upgrades.

For the next act in its Bespoke Collection, Rolls-Royce has found one of its own to celebrate with the Phantom Drophead Coupé Waterspeed Collection, noting the achievements of British land and water record-holder Sir Malcolm Campbell. Like a few other racers of his era in the 1920s and 1930s, Campbell used his Bluebird Motor Company and Bluebird Garage to fund his interest in motorsports. He would break the waterspeed record in 1937 in his Bluebird K3 powered by a Rolls-Royce R engine, traveling 126.33 miles per hour on Italy's Lake Maggiore.
We've seen sketches of what Rolls-Royce intended with the Waterspeed Collection, and the real thing is just as handsome, and the new model includes a number of firsts for the marque. The Maggiore Blue exterior paint is also used for highlights on the engine, the polished wheels, two-tone steering wheel and the dashboard. The tonneau cover normally finished in teak is instead done in hand-finished brushed steel, a closer contrast to the Windchill Grey interior. The Abachi wood veneers have also been bookmatched so that their grain evokes the wake of a speeding boat.
The droptop will be shown first at the Bluebird Garage Cafe in London on the site of the original garage, after which it will get its first wider showing at the Concorso D'Eleganza at Villa D'Este later this month. The press release below has a lot more detail on the finer detailing of the Drophead Coupe Waterspeed, and the images above are worth at least 8,000 words.