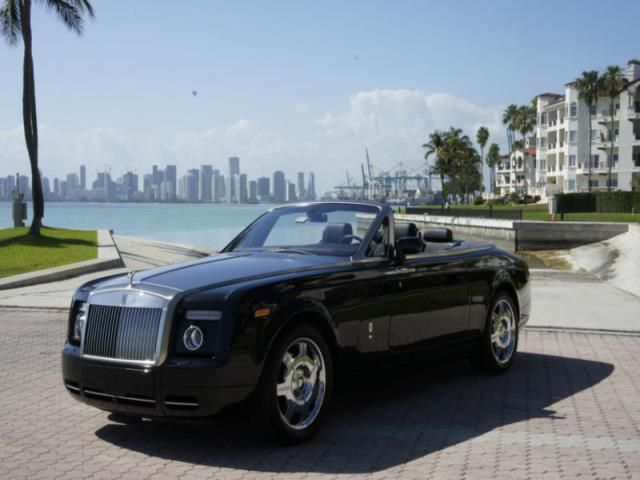 2009 Rolls Royce Phantom Drophead Convertible, black on black with only 2937 miles. The car is in excellent condition and is fully loaded, it was always garage kept No wrinkling on seats or scratches on body or rims. Price negotiable,

Here's a pro tip: if you're going to fire your chauffeur, make sure he hands over the keys to your Rolls-Royce Phantom first. If you don't, you just might wind up with scene like the one in the video below on your hands. In it, some sprightly soul decides to eschew the beaten path for a quick frolicking over hill and dale in the luxury leviathan. The grounds will never be the same. Grass, mud and water are all sent scattering as the Rolls-Royce proceeds to pound the earth into submission.
There's also a few smoky burnouts thrown in for good measure. We can appreciate any shenanigans with a high-dollar automobile that don't end in wrinkled sheetmetal. You can check out the full glory of the sideways Phantom in the video below.

This is the Rolls-Royce Phantom Coupe Ghawwass Bespoke Edition, the latest car to join the long and distinguished line of Rolls-Royce limited editions that have arrived over the years. With that in mind, we'll allow you one guess as to what market this limited edition is destined for.
If you said the Middle East, which is almost always the answer when talking about ultra-limited, special editions of the world's finest luxury and sports cars, then give yourself a pat on the back. As for that name, "Ghawwass" is the Arabic word for diver, and attaching it to the Phantom Coupe is meant to celebrate "the traditional method of collecting pearls from the Bahrain pearl banks," according to Rolls-Royce's Facebook page, where these pictures were posted.
Considering its nautical namesake, the color scheme of the Phantom Ghawwass makes a lot of sense, with a Turchese Blue exterior and a tan and Turchese interior that brings to mind bright blue water and sand. The veneers are pearl - although we can't see them in this photoset - befitting the car's inspiration, while a Dhow, a traditional Arabic sailboat, can be found in the coachline and stitched into the headrests.