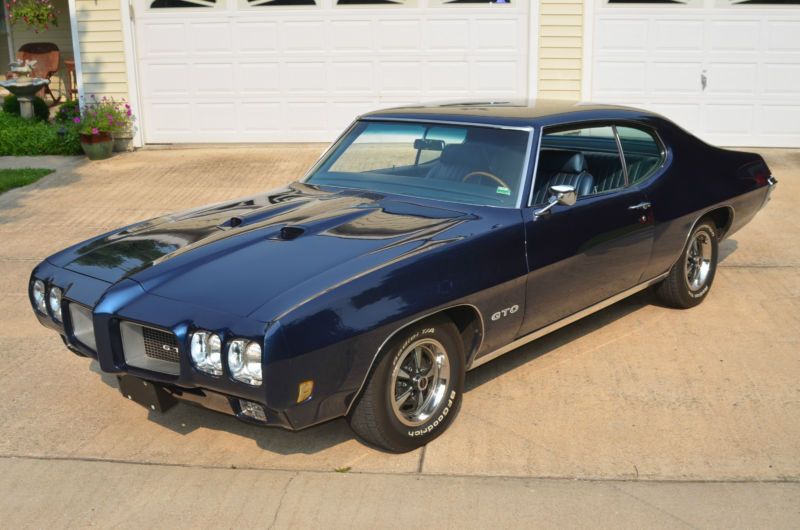 This GTO is a documented California delivery with a rust free body. The Atoll Blue paint was finished in Dupont
Chromabase B9808K Alt 1 and Dupont Premier Clear in the summer of 2005. The body lines are excellent and the fit
and finish is superb. The chrome and bright trim is excellent and both the exterior mirror and rear bumper were
replated.
The Engine:
The 400 Cubic Inch Pontiac V8 is original and was rebuilt in 2005 with about 90,000 miles on the engine. A Missouri
Performance Engine Shop did the rebuild to Ram Air 3 Specs with Ram Air 3 Camshaft. Other performance upgrades
include Pro Rebuilt Carburetor ($399) and Ram Air factory headers and ultimate exhaust kit ($740.00) The engine
starts right up on the automatic choke with an awesome rumble. The big V8 performs flawlessly, carries 60-80 pounds
of oil pressure with no smoke and no leaks. Take a look at the engine bay images... all correct hoses, hose
clamps, fittings, and even factory decals are correct. The air conditioning system is complete and works
perfectly... my meticulous friends even restored the original California Evap Emission System... AMAZING!
The Interior:
The matching blue interior of this GTO is nearly flawless. The dash and dash pad are perfect! All the lights and
switches work perfectly including the A/C and all of the power windows. All the gauges work perfectly except the
odometer is stuck. The center console is excellent, the headliner is superb, the front buckets and rear bench have
no noticeable wear and the blue carpeting is nice as well. The front passenger floor mat could use a cleaning. The
sport steering wheel and horn button are excellent. The interior has two non stock upgrades... they are an under
dash Air Fuel Ratio Gauge ($200) these gauges are an excellent tool when tuning a vintage muscle car, and the stock
AM radio was upgraded to stereo with I-pod compatibility by S&M Electro Tech ($430)... this upgrade is invisible
and the I-pod connector cable is accessed through the ash tray... very nicely done.
The Transmission:
The automatic transmission received a complete rebuild in July of 2006. The transmission shifts crisply and handles
all the torque of the big V8 with no leaks or evidence of slippage.
The Trunk:
The trunk is in excellent stock condition with no evidence of corrosion or damage. Stock spare tire, jack, and hold
down hardware are present as well as jacking instruction decals. Trunk seal is in great condition.
The Chassis:
Take a look at the photos... a rust and damage free frame, new fuel tank, new free flow exhaust, new shocks,
springs, sway bars, and brakes, four new PMD wheels and 4 very nice BF Goodrich TA Radials. The car drives and
handles like a new car.