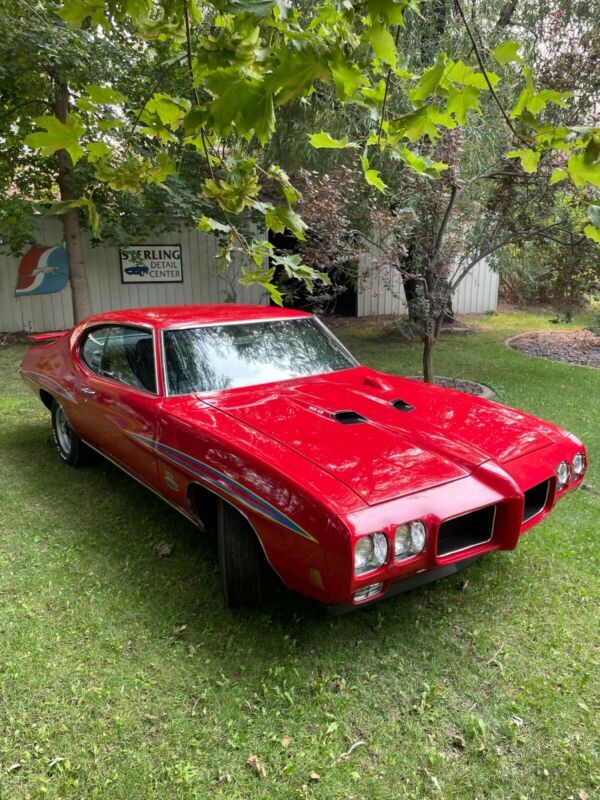 Pontiac GTO. Judge 1970 Pontiac GTO Judge (real with PHS documentation). This is a numbers matching, rare
cardinal red judge that has just undergone a complete rotisserie rotation with only 992 miles since completion.
This car was from a very dry environment and retains its (original sheet metal) including quarters, doors, fenders,
floors and trunk floor. Original mileage at the beginning of the restoration was 40,500. The body was put on a
rotisserie and media blasted to bare steel. The paint is done in base clear urethane and has been extensively cut
and rubbed and is stunning!! the under carriage was done in red oxide with slight red over spray from a 45 degree
angle from the outside as factory. The frame was also put on a rotisserie and media blasted to bare steel.
Bushings, ball joints, fuel lines, brake lines, body bushings, etc.. have been replaced. The frame was
reassembled and sprayed with satin clear to prevent any further deterioration. the original Vin stamped number
matching motor was also rebuilt. The rotating assembly was balanced. The number 12 RAM air 3 heads received
harden seats to accommodate today's fuels. New rings, bearings, timing gears, oil pump, etc. were installed. The
original vin stamped turbo 400 transmission received new seals and filter kit. This Judge also retains its
original 355 posi. traction rear end it was born with. It was inspected and cleaned and resealed. It Has some
Unique Options. INCLUDING: Power disc brakes, Power steering, HD Turbo 400 automatic, Console, Remote mirror,
FORMULA wheel, HOOD TACH, Wheel well moldings, Under hood light, Trunk light, Push button radio, 8 Track, Soft ray
glass, and of course THE JUDGE. ( This is a stunning example of Pontiac's muscle car era). As for the numbers as
follows.