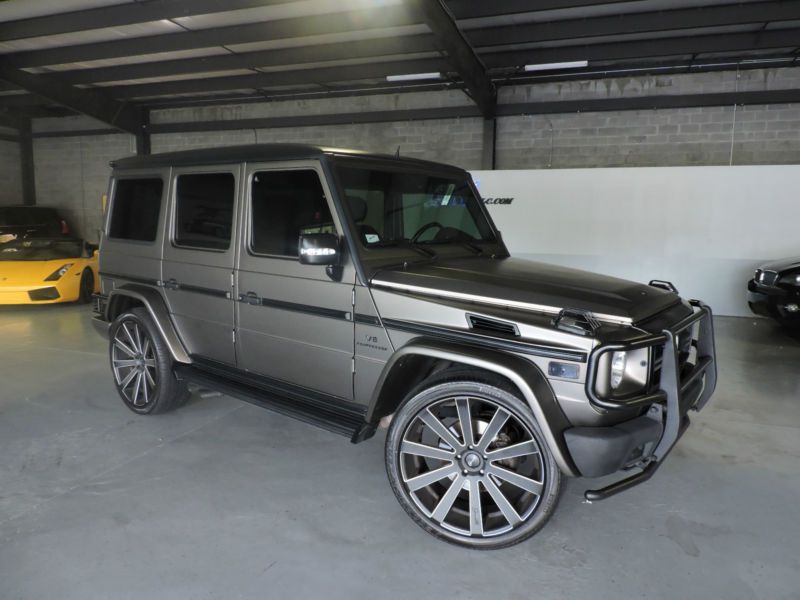 A moving fortress. That is how Mercedes-Benz describes its tuned, AMG version of the Geländewagen. A very
luxurious, very fast-moving fortress would be a more apt description.
G-Class Gelaendewagens originated as high-end, all-purpose troop transports for the West German military (and a few
other NATO forces) more than two decades ago, sort of a European take on AM’s original Hummer.
Somewhere along the line in the recent SUV craze, some enterprising German executive figured there was a market for
the military style luxury sport-utility vehicle. Presto, they ended up with the rolling anachronism with more
horsepower than a sports car and leather worthy of a Rolls-Royce.
The duality of the G55’s origins and its current status are littered throughout its tank-like, slab-sided body.
True to its military off-road roots, Mercedes’ G-Class brochure brags about its 36- degree angle of approach and
27- degree angle of departure (both measures of how steep a hill it can ascend/descend without scraping its
bumpers). The AMG installed beautiful exhaust side pipes.
The G55 also boasts no less than three locking differentials, the most of any production SUV sold in North America.
The G55 can force the front and rear wheels to distribute torque equally. Ditto for the split between the rear two
wheels and the front two wheels. That means there’s virtually no situation in which the G55 can’t find
traction. And then, to absolutely, positively ensure that you need all that grip if you dare venture off-road, AMG
plunks a tire-spinning 479-horsepower originally but this one is well over 500 with ECU and exhaust upgrade,
5.5-litre V8 under the big square hood. Such is its prodigious torque that Mercedes strictly admonishes to not lock
any of the diffs on pavement.
There are two off-road- oriented rigid axles, just the trick for off-roading. Inside, the dash is as boxy as a
Hummer’s but the leather is strictly S-Class. You could store a bar fridge in the trunk.
I love the car!
I love it because those silly side pipes make the big AMG V8 sound like a NASCAR car at full gallop. I love it
because you’re always aware that the damn thing weighs almost three tonnes, yet when you press on the loud handle
all that German torque sends you rocketing ahead of that troglodyte in the Camaro. I love it because people stare
as you drive by. Not because I need to see any third-party adoration to assuage my ego but because I love the look
of sheer incomprehension on their faces as they eye this tank-like apparition that for some reason seems to be
wearing the Mercedes-Benz tri-star emblem.
I love that there’s not a single curved line in the G55’s body. That the windshield is almost perpendicular to
the hood. The aluminum scuff-plates that light up the letter AMG in neon blue light. And most of all, those wacky
steel cages that protect the turn signals as if there’s a bayonet-wielding madman ravaging Rosedale in a quest to
prevent proper lane- changing etiquette.
Subjectively, then, the G55 is a hottie. The suspension is sports sedan firm, which means it corners better than it
has any right to.
Few SUVs will outaccelerate the G55. Not only does this AMG V8 have 550hp, but there’s also 589 pounds-feet of
torque. Mated to the five-speed automatic transmission, it makes the G55 amazingly quick — or at least as quick
as a 2,512-kilogram, unaerodynamic square box can be. It’s like watching William “the Refrigerator” Perry
score touchdowns for the Chicago Bears.
Over the last 25 years, M-B has sold over 175,000 G-Wagens worldwide, averaging close to 7000 units per year. Most
of them go to various international militaries, and every one is handbuilt at the same Graz, Austria, assembly
plant.
ABOUT THIS CAR
You are looking at a gorgeously maintained vehicle. BIG BUCKS WAS SPEND ON THIS CAR. I'm Guessing around $20,000
-$25,000 in extras. On top of it being G55 AMG DESIGNO, this car is equipped with TV's in the headrests, Pioneer
base speaker, Pioneer Head Unit with DVD, Back up camera, Bluetooth, Navigation, upgraded exhaust and tuned ECU,
over 600HP...! On the outside it appears to have an expensive wrap, very expensive 24" rims, powder coated all
chrome parts, trims, exhaust, aftermarket brush guards, 2015 G65 Grill with illuminated star, and much more that I
cant think of... The car runs and drives fine and has no problems accelerating to high speeds.For anyone that would like to make an offer, please do so via phone.