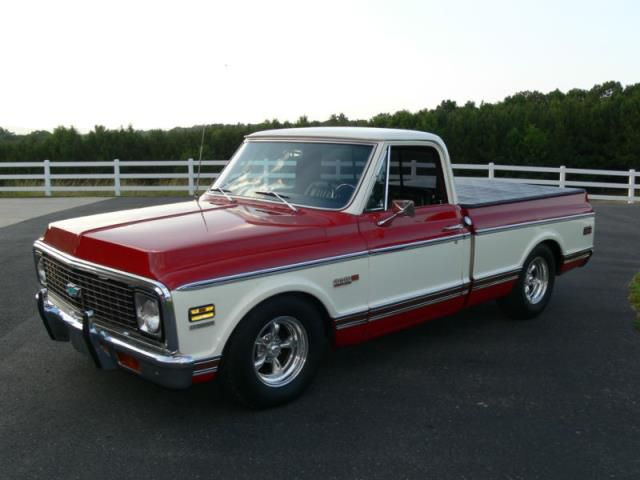 THIS BEAUTIFUL 1972 CHEVY CHEYENNE SUPER DRIVE OR SHOW TRUCK IS OFFERED FOR SALE OR TRADE. JUST TAKE A LOOK AT THE ENGINE COMPARTMENT AND YOU WILL REALIZE THE QUALITY OF THIS BUILD. SS HEADMAN HEADERS CHROME VINTAGE AIR COMPRESSOR, INTAKE, WATER PUMP, ALTERNATOR, PULLEYS, INTAKE, HOLLEY PERFORMANCE CARB, ACCEL HEI DISTRIBUTOR WITH SUPER COIL ALL CONTRIBUTE TO A SHOW TRUCK LOOK AND OUTSTANDING PERFORMANCE. THE BODY IS A BEAUTIFUL TWO TONE RED AND WHITE PAINT SCHEME THAT SHOWS GREAT. THE BRIGHT WARE AND CHROME ARE IN VERY GOOD CONDITION AS IS THE OVERALL FIT AND FINISH.