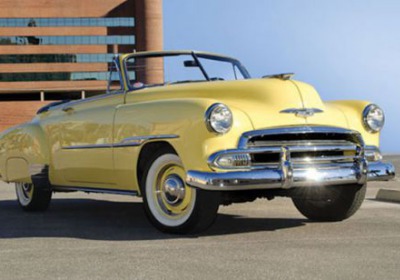 The last car Steve McQueen ever drove in a movie is officially up for auction. The 1951 Chevrolet Styline DeLuxe Convertible you see above is now owned by none other than Rick Harrison of Pawn Stars fame, but once ferried McQueen around the set of his last film, 1980's The Hunter. That flick saw the Bullit star play a bumbling bounty hunter and didn't exactly set the box office on fire. McQueen bought the car after production wrapped, and four years later it sold at his estate sale at the Imperial Palace in Las Vegas.

Flash forward to 2003, and the convertible received a full restoration back to near-stock specifications. Hagerty Insurance estimates the car to be worth around $45,000 without the significant providence. Given its ties to one of film's most popular gearheads, the old Chevrolet could fetch up to 10 times that when it goes under the gavel in Ft Luaderdale, Florida on March 22. You can head over to the Auctions America site for more information. You can also check out the trailer for The Hunter below.