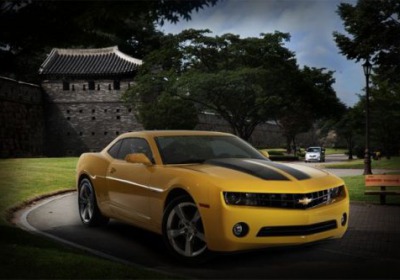 Chevrolet Camaro in Korea – Click above for high-resolution image

The Korean government disbanded the Daewoo Group in 1999. At that point GM already owned about half of Daewoo Motors, a stake that has varied over time. Ever since, the General has used Daewoo's resources to develop and produce a range of vehicles sold under other GM divisions, principally Chevrolet, which has already replaced Daewoo in many markets to become GM's principal global brand. (The globalization of Chevrolet has escalated to such an extent that, over the course of last year, somewhere in the world, a Chevy was being sold every 7.4 seconds.)

One of the few exceptions has been in Korea itself, where the Daewoo name still means something. But that something isn't necessarily good, and so GM is phasing out the name even in the brand's own domestic market. The development has been a long time coming, and will encompass both the cars themselves and the company that builds them. GM Daewoo Auto & Technology Co. is officially changing its name to GM Korea Co by the end of the quarter.

In an odd bit of history repeating, the company was called GM-Korea once before, after Detroit stepped in to take over half the company from Toyota, which had collaborated with what was then known as Shinjin Motor until 1972. Full details of the announcement in the press release after the jump.

* Chevrolet replacing GM Daewoo to be GM's primary brand in Korea
* GM Korea Co. to be new company name by end of Q1

Seoul – In a move designed to enhance its presence in Korea and to bolster its domestic sales operations, GM Daewoo Auto & Technology Co. (GM Daewoo) announced today that it is replacing the current nameplate with the world's fastest-growing automotive brand, Chevrolet.

All of the company's new product introductions and refreshes this year will be under the Chevrolet badge. Additionally, GM Daewoo announced that it will be changing its company name to GM Korea Co., which is globally consistent with all other GM country operations. The company name change is expected to be completed by the end of Q1.

"This important new brand strategy is designed to strengthen our commitment to the Korean market, recognizing it as one of the strongest-performing countries within GM's global operations. We are well positioned to bring one of the world's iconic brands to Korea," said Mike Arcamone, President and CEO of GM Daewoo. "We cannot afford to sit still, and instead, choose to make a bold move with the launch of Chevrolet in Korea."

GM's market research overwhelmingly points to consumer acceptance of the Chevrolet brand in Korea. "This new growth opportunity will allow us to compete in brand new segments and offer our customers more choices than ever before, resulting in a strong future for our company, our employees and our sales agents," said Arcamone.

This year, the company will begin its most aggressive vehicle launch plan in its history and will have an all-new product lineup with the introduction of eight new models carrying the Chevrolet name. The portfolio includes the Chevrolet Camaro, Chevrolet Orlando, the Chevrolet Aveo global small car, as well as a new SUV and a new premium midsize sedan.

"Not only are we giving Korean consumers more vehicle choices than ever before, but in order to ensure Chevrolet's long-term success in the domestic market, we are totally redesigning our dealerships, A/S networks and sales networks so that customers will be able to enjoy Chevrolet's award-winning dealership experience and service," said Arcamone. "Our main goal is to achieve the highest levels of customer satisfaction and loyalty."

This next step of its evolution recognizes the company's rich heritage and GM's commitment to Korea, which is one of GM's primary production and engineering operations. "Our sales increased 20 percent last year, our domestic market share increased double-digits and our exports soared 35 percent," said Arcamone. "We are able to make this bold, strategic move to Chevrolet because of the hard work and dedication of our 17,000 employees, who have unflinchingly focused on increasing our domestic market share and supporting Chevrolet's global growth in our export markets."

According to GM, a Chevrolet was sold somewhere in the world every 7.4 seconds in 2010. Last year, more than 4.25 million Chevrolets were sold around the globe, and currently one out of every four Chevrolet vehicles is manufactured in Korea.

In step with its new brand strategy, the GM Daewoo Board of Directors, factoring in the best interests of the company, its employees, shareholders, dealers and suppliers, approved the new company name this morning. The current GM Korea will keep its name, GM Korea Ltd., and its focus will remain on the Cadillac brand.

"Changing our corporate name will increase our standing within GM globally while demonstrating our commitment to growing locally," said Arcamone. "With the significant changes that we are announcing today, our goal is to increase our domestic sales and market share, generate additional revenue, strengthen our relationship with the customers, create new jobs and expand our presence in Korea. We regard these moves as a key to our long-term success and fundamentally believe they will also bring added benefits to our customers and the Korean economy."

Founded in 1911 and named after famous, Swiss-born race car driver Louis Chevrolet, Chevrolet is one of GM's four core brands and its largest brand. Chevrolet's celebrates its 100th anniversary this year with sales in more than 120 countries The Chevrolet brand constitutes 53 percent of GM's global business.

"Chevrolet has enjoyed success in mature markets in North America and Europe, as well as in emerging markets in Asia Pacific, CIS countries, and Latin America," said Arcamone. "We are confident our customers in Korea will embrace Chevrolet as well."

GM Daewoo Auto & Technology was established on October 17, 2002. It has five manufacturing facilities in Korea as well as an assembly facility in Vietnam. In addition, GM Daewoo provides market and brand-specific vehicle kits for assembly at GM facilities in China, Thailand, India, Colombia and Venezuela. 2010, GM Daewoo sold in Korea and exported more than 1.7 million units, including CKD products. GM Daewoo now produces vehicles and kits that are offered in more than 150 markets on six continents. More information on GM Daewoo and its products can be found on the company's website at http://media.gmdaewoo.co.kr/.