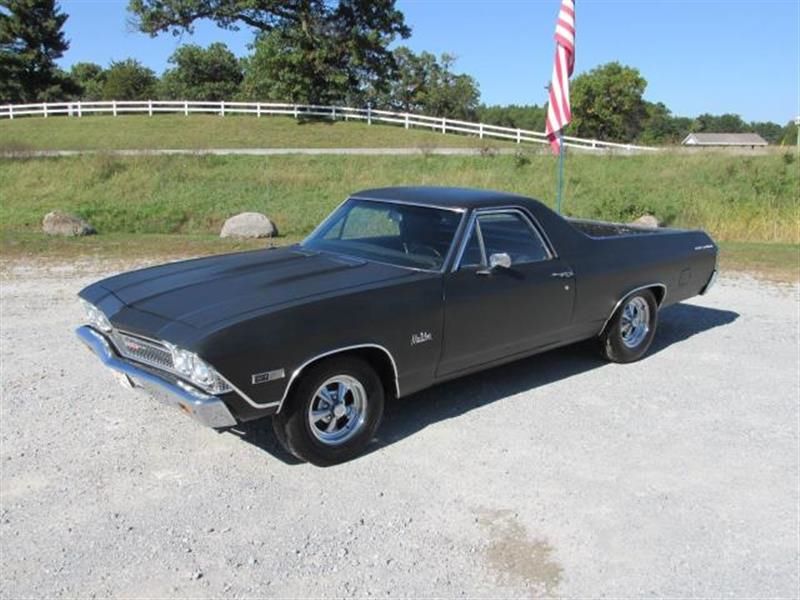 Email me at : JamesTrappe91hdx2f16@yahoo.com 1968 Chevy El Camino. This is a west coast Chevy from Washington state. It is avery solid car with a nice straight body. The car starts right up with no smokeor noises and runs good. Vin decodes as follows... 1= Chevy Custom El Camino V8 (Model - Series)80= Two Door Sedan Pick Up(Body Style)8= 1968 (Model Year)B= Baltimore MD. (Assy. Plant)The last six= Thesequential Production Numbers.In 1968 Chevy made 41791 El Caminos +/-Only 26690were Custom El Camino V8s like this one. 5190 Were SS El Caminos and the restwere -Standard El Caminos- with a 6 cyl. or 8 Cyl. engine.This is a greatdriver. I drive the car a few times a month without issue. The door jambs andengine bay are gloss black already, I just like the way it looks now andwherever I go people always say No Way don't paint the car... So this ishow I've driven it the last couple summers. I know everyone has differenttastes so if you did want the gloss black paint job with white stripes, thejambs have already been painted. It also has a very nice original steel cowlhood installed if you wanted to make a SS tribute car. Washington state platesthat came on the car when I bought it are included as well as other Washingtonstate info. It has the old two into one exhaust that I had planned on replacingwith headers and a dual exhaust system. It also has one seam that needs to bere-stitched on the original headliner and a new windshield wiper switch. Justsome little stuff that still needs attention but I wanted to point these thingsout to everyone. This is a very solid and honest old Chevy. If your wonderingwhy the picture shows the car with a Michigan plate on it it's because itwas the only plate I had that said 1968 on it so I put it on there for thepictures! Thanks for taking the time to check out my car and if you have anyquestions I will be glad to help.