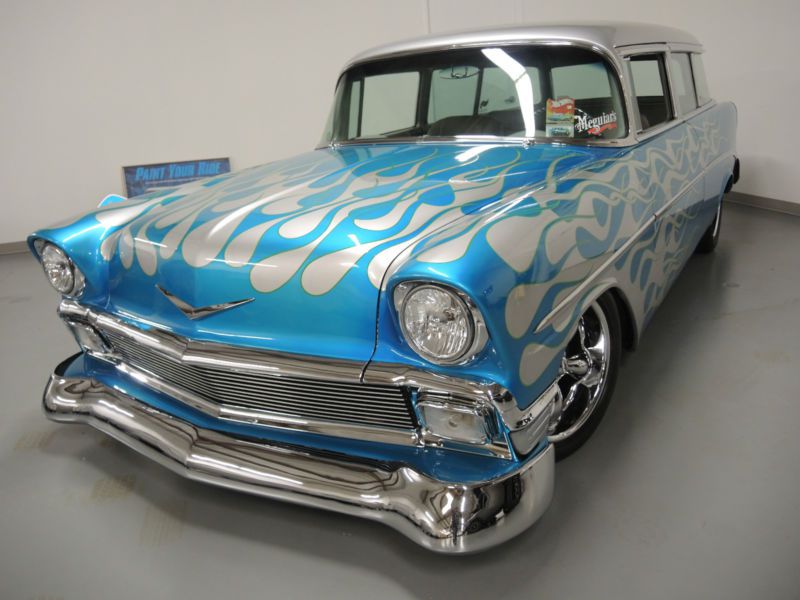 This amazing one of a kind Chevy has quite a pedigree. She has won multiple regional awards, has a trunk load of
trophies from cars shows around the Southland, been in too many magazines to list and is a Mequiars sponsored car.
However, her highest honor was having a Hot Wheels Red-Line car made from it! The PPG Red-Line Hot Wheels for this
car are some of the rarest from the last 10 years (only 3,000 made) and often sell for $85 on-line. And that is
just for starters…this car has had many of the right gearheads in Southern California build it. With just 6,491
miles on the odometer since the completion of this amazing build it is barely broken in.
Get invited by the Grand National Roadster show, Cruisin for a Cure, Good Guys, Danchuck Tri-5s and all of the
local shows you have time for without having to try! Sure, you could trailer it there and insure that it is super
clean when you get there, but this car is very streetable and most of the fun is in the getting there.
Here are just some of the craftsmen involved with this awesome build:
· Flames and Pinstripping by Jimmy C
· Fabrication, Paint (PPG Medium Saphire) and Assembly by Randy Ward of Rod Benders
· Bodywork by Custom Auto Body
· Sound System by Boston Acoustic
· A/C and all of the little details by John Mutch of Savi Ranch Auto
· Interior done by Mission Viejo Auto Interiors “Louie”
· Transmission built by Carl at Lake Forest Transmissions
Magazines she has been in or featured in:
· Car and Driver
· Street Rodder
· Good Guys
· Drive
· Rider Review
· Powerblock
Notable Awards and Recognition:
· Winner of the PPG Hot Wheels Spectraflame 2008 “Paint Your Ride” contest at SEMA beating out 11
other amazing finalists.
· Barry Meguiar’s top 100 Cars in USA
· Sponsored by Mequirs Car Care Products
· John Force Best of Show
Ed Big Daddy’s Rat Fink Best Custom
Engine Goodies:
· Block: 496 Cubes (454 Stroker) cranking out 600 HP and 650 ft/lbs of torque on dyno
· Steel Stroker Crank
· Roller rockers
· Blower Pistons
· Custom ground Engle Cam
· High Performance HP Chevy Heads
· 174 Low Profile Roots Type Weiand Blower
· 800 CFM Edlebrock Carburetor
· Street and Performance serpentine belt system
· Ceramic coated headers
· MSD Ignition
Smoothed firewall
Suspension and Brakes
· Ford 9” rear end with 3.50 Gears
· 700 R4 4 Speed Automatic Transmission
· 4 Wheel disc brakes
· Air ride suspension