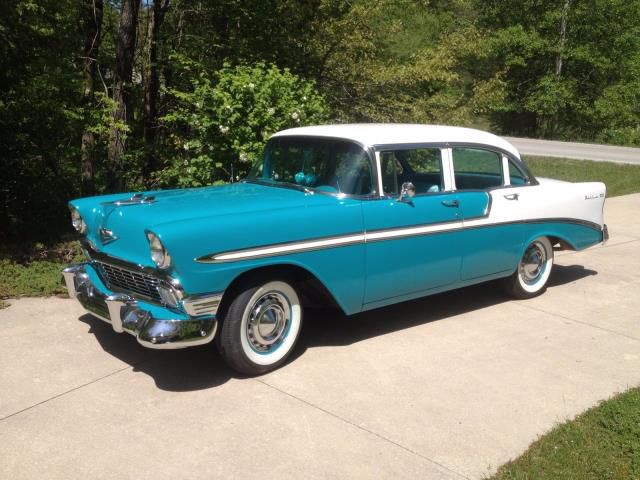 This "56 Chevy Belair Is In Mint, Almost Factory New Condition, A Looker! As YouCan See From The Pictures, It Is A Classic Cruising Beauty! It Is Super CleanAnd Superfine Inside And Out, Not A Rust Bucket, No Mold Smell At All. It IsRebuilt Using Original Factory Replacement Parts! The Engine Was Replaced With A238 Better Than The Standard, More Horse. It Is Automatic Not Stick! It RunsWell. Folks, This Is The Real Deal, The Real Mccoy! The Past Owner Spent Over$25,000. Restoring It. I Also Have Money Invested In Repairs.. It Is OneBeautiful Car, Garage Kept. There Are A Few Minor Details The New Owner NeedAttn: Has The Original In There Which Can Placed W A Cd Player, See Pictures.The Original Is In There For Aesthetics But, Is A M Only,it Is Original. ThereAre A Few Areas The Size Of Your Thumb Where The Paint Cracked Or Chipped, VeryVery Minor, Not Noticeable Unless Pointed Out. Other Than That, There Is NothingLeft To Do. It Is Ready To Drive, It's Ready To Go, Toot Toot! The InteriorIs The Original Blue-green, No Rips Or Tears, And Is Comfortable Too, Hop In!The Carpet Is Like Show Room New And Floor Mats Too.you Are Not Going To Find ASpeck Of Rust On It. It Comes With Cloth Cover, A New Spare Tire In Trunk, AndSeveral Factory Service Manuals And Guides, Shows Where Every Nut And Bolt AndEverything In Between Goes! This Amazing Car Can Be Yours, Don't Miss It.