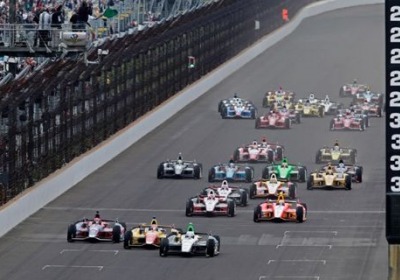 If the 2013 Indy 500 were a movie it would be the one expected to win all the little statues come awards season, and if it were an athlete it would have made spectators watch in awe as it broke record after record. And this kind of talk comes after last year's race was considered one of the best ever – the last lap hijinks in 2012 and Takuma Sato's crash leading to a podium ceremony straight out of a Golden Globes tearjerker.

But this year's race delivered more than anyone expected, from the 250,000 fans to the commentators to the IndyCar series itself and, finally, to the guy who hopped through a two-mile window on Lap 197 to take the lead and keep it until the end.


Ed Carpenter, Indianapolis native, stepson of Indianapolis Motor Speedway owner Tony George and IndyCar's only driver and team owner, took pole position of the 33-car field with a four-lap average of 228.762 miles per hour around the 2.5-mile oval. The cars would take off in three-up rows, the two in the row with Carpenter being 21-year-old rookie Carlos Munoz in his first-ever IndyCar race and Marco Andretti, scion of that famous line and eight-time entrant trying to break the so-called Andretti Curse – there hasn't been an Indy 500 winner with that surname since Marco's grandfather Mario did it in 1969.

The order after that was EJ Viso, AJ Allmendinger making a return to IndyCar with Penske after a seven-year hiatus, having been let go from Penske's NASCAR team for a failed drug test last year, Penske teammate Will Power, who's never won on an oval and hasn't won anything since last year, former winner Ryan Hunter-Reay, three-time winner Helio Castroneves, James Hinchcliffe, JR Hildebrand, Alex Tagliani, and the long-suffering Tony Kanaan in 12th.

After the green flag waved, it took just four laps for the day's first caution to show, with JR Hildebrand getting loose in Turn 1 and sliding into the wall, then down onto the apron. The incident was almost a mirrored image of his performance in the 2011 race, when he was leading on the last lap but spun into the wall on the last turn. Carpenter did well to keep his lead under caution, losing control of his car at one point and taking a trip across the grass before getting back on without damage.

Five laps later it was Tony Kanaan who would begin his domination of the race. He had passed five cars on the first lap and another four on Lap 2, hanging around in third position until Lap 9 when he assumed the lead. For the next 20 laps, he and Andretti would swap the lead, until Sebastian Saavedra would bring out another yellow flag on Lap 29 after clouting the wall.

Penske drivers Power and Allmendinger enjoyed the sunshine of the lead at a quarter of the race distance, but the yellow flag came out again when Takuma Sato spun at the exit of Turn 2 on lap 57. From there it was a pretty clean race, the lead changing a ridiculous number of times because of the huge tow afforded by the spec IndyCar chassis.

On Lap 193, Graham Rahal crashed to bring out the penultimate yellow flag of the race, while Hunter-Reay was leading Kanaan and Munoz. It took four laps for the course to go green again, and both Kanaan – who's known for his excellent restarts – and Munoz passed Hunter-Reay going into Turn 1. Hunter-Reay knew he was going to get passed, calling the DW12 IndyCar chassis "a bulldozer" when it comes to clearing the air for those behind, another driver saying it makes "the leader the slowest guy on the track."

But the ease of passing it creates meant Hunter-Reay knew he'd probably get another shot at both drivers in the next three laps – that is, until a lap after the restart last year's winner Dario Franchitti spun into the wall and crashed at Turn 1, bringing out a yellow flag that would last until the end of the race.

Kanaan, driving with torn tendons in his right hand, took the flag behind Jim Harbaugh in the Corvette Stingray pace car. It is Kanaan's first triumph in this race and the first for his Hydroxycut KV Racing Technology/SH Racing team in the IndyCar series, and he's the fourth race winner in the first five races of 2013. The low number of cautions kept speeds high, Kanaan's average velocity of 187.433 mph breaking the 23-year-old record set by Arie Luyendyk. Fifteen drivers lead the race, a record, swapping the front spot a total of 68 times, another record that doubled last year's record. Five lead changes came in the last 30 laps.

Kanaan was followed by Munoz, Hunter-Reay, Andretti, Justin Wilson (with the top Honda-powered car gained nine positions from his starting place), Helio Castroneves, AJ Allmendinger (who led 23 laps on his return but lost out on strategy when a seat belt problem forced him to pit early in the race), Simon Pagenaud, Charlie Kimball and Carpenter. Andretti's third place takes him to the top of the driver's standings, ahead of Sato, Castroneves, Hunter-Reay and Hinchcliffe.

In 11 tries, Kanaan has never won the Indy 500 – he's led the race eight times and has come in every place from second to fifth, including third last year, making him the most tenured veteran without a victory. Until this weekend.