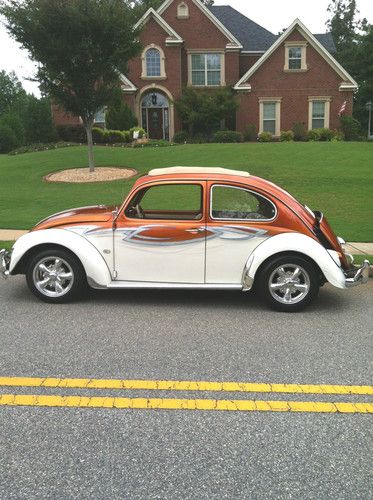 SOUTHERN CALIFORNIA STYLE CUSTOM, WHAT A HEAD TURNER.  PEOPLE LOVE THIS CAR.  FAR TOO MUCH TO LIST EVERYTHING.

THE BODY WAS SODA BLASTED TO BARE.  EPOXY PRIMED THEN THE WILD HOUSE OF KOLOR CANDY PAINT. THEN HAND PAINTED GRAPHICS APPLIED BY CHAPARRAL AUTO GRAPHICS IN MORGAN CALIF.

DYNA MAT SOUND DEADENING MATERIAL WAS USED THROUGHOUT THE INTERIOR.

THIS IS A DRIVING SHOW CAR.  IT WOULD COST DOUBLE TO BUILDTODAY. I HAVE A COMPLETE FRONT END REBUILT KIT THAT GOES WITH THE CAR

THIS BUG STANDS OUT.