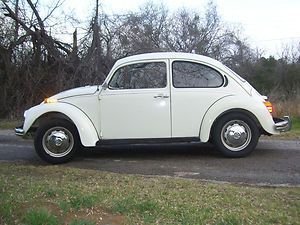 Condition: UsedA vehicle is considered used if it has been registered and issued a title. Used vehicles have had at least one previous owner. The condition of the exterior, interior and engine can vary depending on the vehicle's history. See the seller's listing for full details and description of any imperfections.Seller Notes:"Classic 1973 Beetle, in good condition, white paint still shines, black interior in good condition, see pictures. Car is 40 years old this year and has nicks and blemishes on the exterior and interior, but no real damage or dents. Seats are good and floor is solid. Starts right up and purrs. 4 speed manual drives well in city and highway. Has had recent tune up and new alternator. Tires are in good condition. Overall this is a nice car, gets lots of compliments, but will need a little TLC to make perfect."