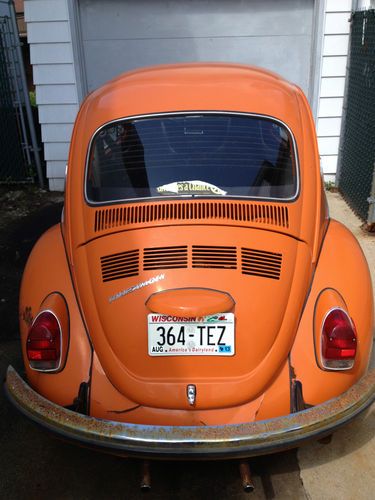 Condition: UsedA vehicle is considered used if it has been registered and issued a title. Used vehicles have had at least one previous owner. The condition of the exterior, interior and engine can vary depending on the vehicle's history. See the seller's listing for full details and description of any imperfections.Seller Notes:"The car is in fair condition. Lots of Wisconsin winters have taken a toll on it. Some rust and corrosion around the headlights. Needs a new gas cap as gas seems to have spilled out and down front right fender causing some paint discoloration. There is rust on the bottom and part of muffler is now hanging (pictures included). There are dents in both rear fenders, but I do have a new fender for rear driver side. Burning through oil as well. Car does run though and got me through last 2 winters. NO heat or stereo. Bad job of speaker installation by friend years ago has them in an awkward spot (see photos). Hand parking brake also needs to be re-connected. Brakes are in decent shape but old. Car sat for 16 years before I pulled it out in summer or 2011. Had some work done to make it safe enough to drive, replaced carburetor with a used one among other things."

I've personally owned this car since 1991.  Bought it from an older lady down in Illinois.  Drove the car through all climates and seasons until about 1996 when I put it in a garage for storage and decided to get a more modern car.  The car sat there until the summer of 2011 when I finally had to do something with it as I lost the storage space.  Spent about $1500 to get it running again and safe enough for street use.  As I said above, there is definitely rust and corrosion issues after all this time.  The car has gotten me through the last two Wisconsin winters and kept starting when all my co-workers cars wouldn't.  Runs okay, but needs some love.  It is burning through a lot of oil.  I really don't want to sell it, but I don't have the time or space to properly re-build it.  The car has no heat, the stereo is gone, and the speakers are in an awkward place on the doors.  I'm not gonna lie, this car is going to need some work, but overall it's in fair condition.  As I said, it does run and I've had it out on the streets plenty.    If you have more specific questions you can contact me at (414) 737-5670.  Upon sale, picking up the car will be the buyer's responsibility.