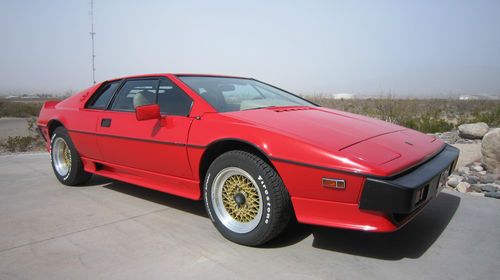 1986 Lotus Esprit 4 cylinder turbo.  36,500 miles I have owned this car for a year and a half (a long time for me) and have driven it about 3000 miles. It has been trouble free and is a lot of fun to drive. I have owned several exotics (lambos, lotus, etc) and it is actually more fun in a lot of ways than most of them were. I purchased it from Lamborghini of Houston. I have changed all fluids, and installed new tires, and a few other maintenance items. Car starts right up and does not leak any oil. Not sure what else to say, but you will be pleasantly surprised of the condition of the car considering its age. The paint is in great shape, as is the glass and the interior. I can store the car until you get shipping sorted out. Feel free to call me if you have any questions. 575 430 1322.

Lotus getting into the motorcycle business

Lotus founder Colin Chapman is famously quoted as saying something to the effect of "Simplify, then add lightness." We're a bit amazed that it took this long, but someone appears to be taking that message to heart at the British marque, losing a couple of wheels, a clutter of bodywork and a whole mess of weight. No, Lotus isn't planning another spindly Seven-style trackday racer, it's getting into motorcycles.
Well, sort of. As an automaker, Lotus apparently isn't directly behind this two-wheeled effort, but it does appear to have officially lent its brand and logo to a new company, Lotus Motorcycles, which counts former Volkswagen Group designer Daniel Simon, Germany's Holzer Group and auto racing team Kodewa among its partners. The latter builds and races Lotus' T128 Le Mans Prototype in the World Endurance Championship series.
The new company is touting an as-yet unseen motorcycle, a racing-inspired "hyper bike" called C-01, releasing only the image above - a carbon fiber fuel tank trimmed in Lotus' trademark black and gold livery. Details are tough to come by, but the project is said to include a powertrain good for around 200 horsepower and construction involving titanium, carbon fiber and aerospace-grade steel.