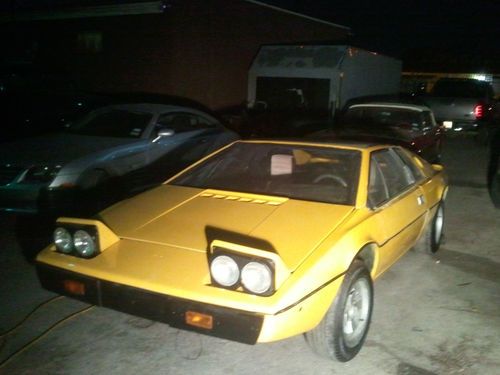 The National Highway Traffic Safety Administration has received 17 complaints about an errant oil line in the Lotus Elise, and thus, has opened an investigation. The issue concerns the line on the front right cooler, which, having got loose, sprays oil either on the wheel or inside the engine bay.
This investigation pertains to around 4,400 of the little track-day wonders sold in the 2005 and 2006 model years. There have been no injuries, but one car did leave the road and catch on fire. A NHTSA investigation doesn't mean a full recall has been issued, just that your friends in the fed are looking into the matter.

This year's Formula One season might qualify as being just as crazy as last year's, only it's a different kind of crazy. Instead of a new winner every Sunday, how the winner actually manages to take the victory is the mystery, and just when we thought the season might have settled into a groove regarding team performance, here comes the Spanish Grand Prix to remind us that we don't know anything until the race has been run.
There were many similarities to past weekends to being this one: Mercedes-AMG Petronas showed awesome one-lap pace, Fernando Alonso did well enough in qualifying to get fifth on the grid but talked up the race pace of the Ferrari, Kimi Räikkönen was the equivalent of a racing photobomber, never saying much but always showing up in the picture, Felipe Massa wasn't really big on the tires and McLaren might want to consider starting a blues band they spend so much time singing them.
Then the lights went green and things went nuts...

We've covered many cars from the movies and TV that have made their way to auction (the original Batmobile, good old General Lee and even Bond's iconic Aston Martin DB5), but this one ranks up there among the rarest and coolest. RM Auctions has just announced that the Lotus Esprit submarine car used in the James Bond film The Spy Who Loved Me has been added to the docket for its upcoming auction in London, September 8-9.
Of course, there are dozens of Bond cars floating around out there in collections, but none as unique as this Lotus, which ended a chase scene in the movie by taking a long walk off a short pier and transforming itself into a submersible. Since CGI was a meaningless collection of letters back then, the producers of the film actually built a fully functional Lotus Esprit submarine for the shoot. They hired Perry Oceangraphic in Florida to turn one of their six Esprit body shells into a fully functioning submarine, and former US Navy Seal Don Griffin was tapped for piloting duties. RM Auctions claims the Esprit submarine cost over $100,000 to build at the time, which is about $400,000 in today's dollars.
The submarine car comes with a incredible story, too. After filming in the '70s, it was shipped to Long Island, NY where it was kept in a storage unit that was paid in advance for ten years. When the storage contract ended in 1989 and no one claimed the contents, they were sold off in a blind auction to an area couple who had no idea what they were getting. The car has been shown occasionally in the years since, but its value remained purely speculative, until now. To date, the most valuable Bond car we know of is the original Aston Martin DB5 used in Goldfinger and Thunderball that sold for $4.6 million in 2010, but when the gavel falls at RM Auctions' London sale in September, we'll find out if the car nicknamed "Wet Nellie" on set can beat it.