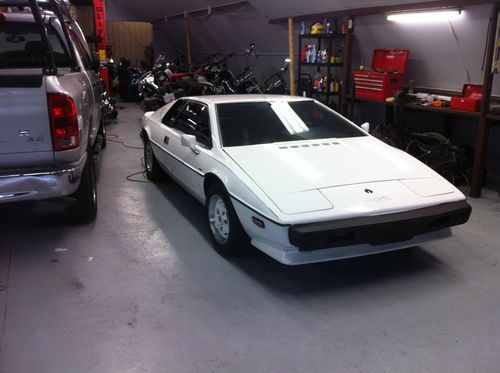 !978 Lotus Esprit S2 White with Black leather interior. Very rare Esprit S2 in the best color combo for this car. Timing belt was replaced last week along with a new clutch installed. We also replaced the fuel lines and replaced a couple gaskets where oil leaks had developed. We are a Dealer in Surrey B.C. and got this car as a repossession. It was originally sold in the U.S. and imported to Canada sometime before 1998. As far as we can tell it has never been in an accident and the mileage is correct. Paint overall is in good shape. Vehicle runs and drives very well,handles like a dream. Has pirelli p6 tires.

The plan put forth by former Lotus CEO Dany Bahar was to explode the British brand into the high-dollar sports car segment and directly challenge its marquee names. The first explosion came with the surprise introduction of five concepts at the 2010 Paris Motor Show. What has continued to surprise, though, is that the explosions haven't stopped: parent company Proton has had troubles leading to a reworking of its Formula One involvement, its IndyCar effort has had a rough ride, Proton's sale to Malaysian conglomerate DRB Hicom led to a production stoppage, and while the company was reassured that it wouldn't be sold, Bahar was shown the door - along with four of those Paris concepts, as far as we can tell. Yet the company is still making highly regarded cars and going racing.
So it shouldn't be all that surprising that, according to a report in Car and Driver, Lotus won't be attending this year's Paris Motor Show at all. Lotus didn't have much to show off at the Geneva Motor Show or the New York Show as all development was halted for two months, and the new corporate owner and new CEO installed by that owner are still working through the details of its niche English property. We will hope this is nothing more than a step in the reorganization, and look forward to seeing the Hethel firm again in Los Angeles or Detroit.