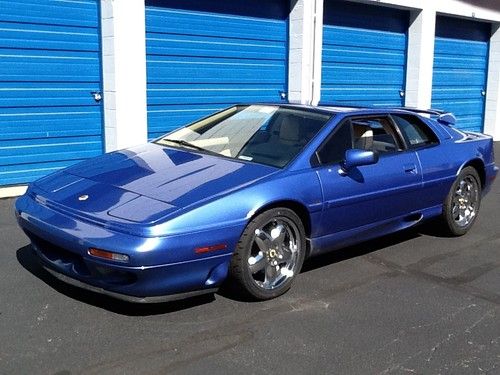 Lotus has just announced a new Evora 'Sports Racer' model that is, well, frankly not much more sporty or racy than the standard Evora or Evora S. Instead, the British company calls the Sports Racer a "visually enhanced and optimized version" of both the Evora and supercharged Evora S. To unpack that a little: The new trim will get a new set of unique exterior colors and a revised interior treatment, and it's fully decked out with options.
The 'Sports Racer' will be available in the buyer's choice of Carbon Grey, Nightfall Blue and the Ardent Red that you see in the image above (the only image we've seen of the car so far). Gloss black accents set the model apart and can be seen on the roof, forged wheels, mirrors and rear badges. Inside, one may choose between black-leather sports seats with red piping and stitching, or a Venom Red leather interior with black piping and stitching. How naughty.
In terms of tech, the 'Sports Racer' gets Lotus' Sports Pack and its remapped throttle response, higher redline, more powerful cross-drilled brakes and a more aggressively programmed Dynamic Performance Management system. The stereo system is also upgraded from the basic Evora, with a DVD player and seven-inch touchscreen display thrown in for good measure.

Sort of like an automotive big box store, Superformance is rapidly becoming the destination for anyone interested in modern kit cars. Besides the normal spattering of Shelby Cobra replicars, Superformance also offers replicas of the GT40 and Corvette Grand Sport. Now, we can add an altogether different type of DIY car to the company's portfolio - Caterham.
Superformance has just been announced as the new US distributor for Caterham Cars, effectively adding the entire suite of Lotus variants to the company's catalog. While there will be a large variety of models available, according to Caterham the mix will skew toward more powerful offerings. As much as we like the affordable appeal of a Seven 160 or Roadsport, simply having the wildly powerful 620 R or Superlight R500 available in the US is a good thing for enthusiasts.
"In the last two years, Caterham has significantly broadened its reach internationally and signing a new official distributor in the form of Superformance in America is a natural extension of how our brand is expanding, rapidly, across the globe," Caterham Group CEO Graham Macdonald said. Read more in the press release below.