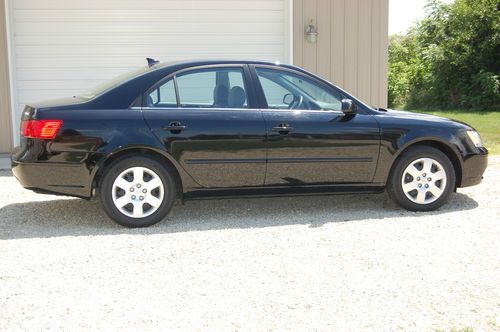 Condition: UsedA vehicle is considered used if it has been registered and issued a title. Used vehicles have had at least one previous owner. The condition of the exterior, interior and engine can vary depending on the vehicle's history. See the seller's listing for full details and description of any imperfections.Seller Notes:"This car has less than 8,000 miles (7,763 as of today) and is in perfect condition. It has always been garage parked, no scratches or dents. Only driven to the grocery and nearby appointments. This is such a good car for anyone looking for a safe and reliable one that looks and drives brand new. No scratches on wheels and 16" tires are excellent still. It is clean, spotless inside and out and has had regular oil changes. This car is like new, but we need to sell."

It's not easy to drive a prototype-level version of the upcoming, second-generation Hyundai Genesis sedan.
Three hours in airports; fourteen hours in a plane; two hours riding in a car from a Iuncheon to my hotel in the now-famous Gangnam district of downtown Seoul; another two hours-plus on a bus from Seoul out to the Hyundai nerve center in Namyang. And that's just the travel.
Finally settled into a massive presentation room deep in the heart of the Namyang R&D center, freshly denuded of all of my camera gear and fortified with abundant coffee and green tea cookies, I still faced hours of product presentation; question and answer sessions with a large team of engineers, designers and executives; an official unveiling under the soaring dome of the Design Hall; a strolling lunch and more coffee. And then, finally, a shuttle ride to the proving grounds around which the whole facility hums with enterprise for an all-too-brief stint behind the wheel of a car that, by this point, I'm basically slavering to get my hands on.