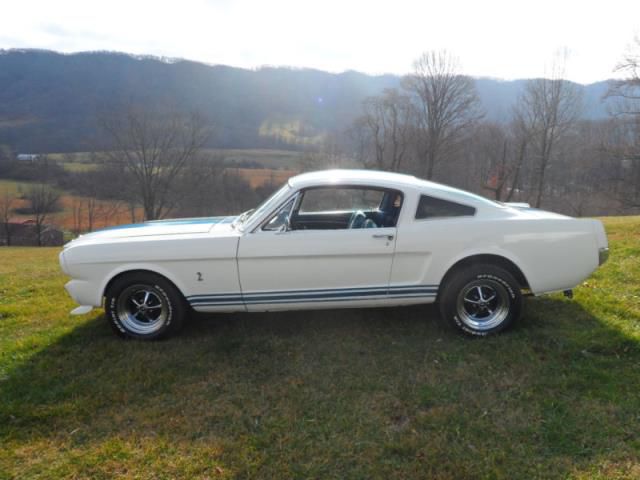 1965 Mustang Fastback, rebuilt 302 motor with about a 1,000 miles on the rebuild. Almost everything under the hood is new, motor is bored 30 over, cast iron GT 40 heads, have been worked, mild cam, summit racing performance intake, summit 600 carb, stainless steel headers with dual exhaust, Magnaflow mufflers, brand new aluminum radiator, 4 speed top loader with new clutch, pressure plate, flywheel, throwout bearing with all new Z bar and clutch linkage. New brakes all the way around, new brake lines from front to back. New gas tank and gas lines from front to back. New emergency brake cables. New shocks all the way around. This car was rotisserie restored last year. New paint job with GT stripes. Paint in not perfect, is probably a 9 or 91/2 out of 10. You have to be really close to see any in perfections. The car has new upper and lower control arms, new steering linkage, new front end alignment, the car runs and drives perfect. It is a turn key car-doesnt need anything. drives and handles great--all kinds of power. This is a very fast car. The interior has been restored, has new carpet and dash pad. New paint inside. The seats were done awhile ago in a leather and cloth which is very rare for these cars. They still look almost new-with the cloth it is a nice touch. All lights work as they should. GREAT CAR. HEAD TURNER.......... New Magnum 500 Wheels and tires. The car also has the fiberglass racing apron on the front with the front spoiler.
Please contact me only at : noratransshipa@net-c.com