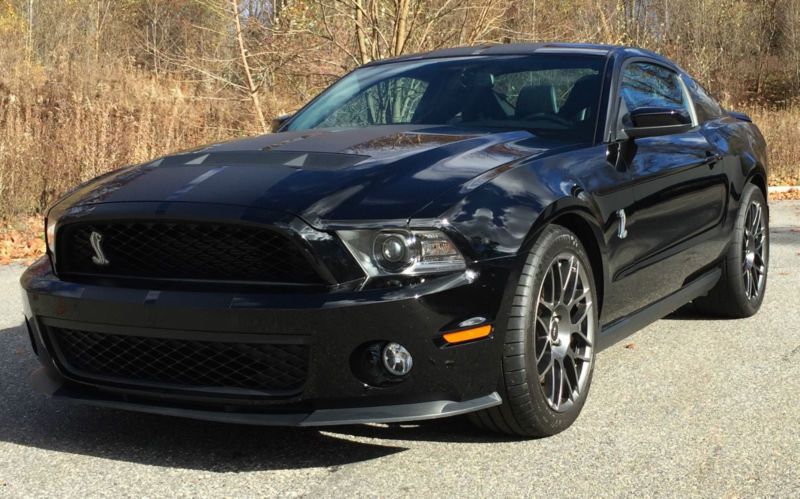 If you have questions email email me at: ewa.kosik@manlymail.net .

This is an absolutely pristine 2012 Shelby GT500 with the optional SVT Performance Package. The car has always been
garage kept, and has never been driven in the rain. It is washed weekly and detailed monthly. Aside from some
shallow surface scratches which can easily be polished out, the body which features Matte Black Racing Stripes is
in perfect condition.
The rear tires are Nitto NT555R 305/32R20 and the front tires are Micheline Pilot SuperSport 275/45zr19. Both
front and rear tires have less than 2,000 miles on them.
The car is completely stock with the exception of:
BMR Lower Control arms
BMR Panhard bar
Quicktime Performance Electronic Exhaust Cutouts
The control arms and panhard bar completely reduce wheel hop and allow you to apply the full 550hp to the pavement
with smooth, lightening quick acceleration.
The QTP Exhaust cutout includes the wireless controller, which means no holes were drilled in the dash. They are
completely adjustable allowing you to choose with the click of a button between a fully stock sound, the full roar
of an unrestricted 5.4L V8, and anything in between. Cutouts were professionally welded in by a custom fabrication
shop.
The interior of the vehicle features the optional Recaro leather seats with embroidered Cobra on the headrest, Ford
Sync with Touchscreen Navigation, Sirius XM radio, Streaming bluetooth audio and the Shaker 500 stereo system.