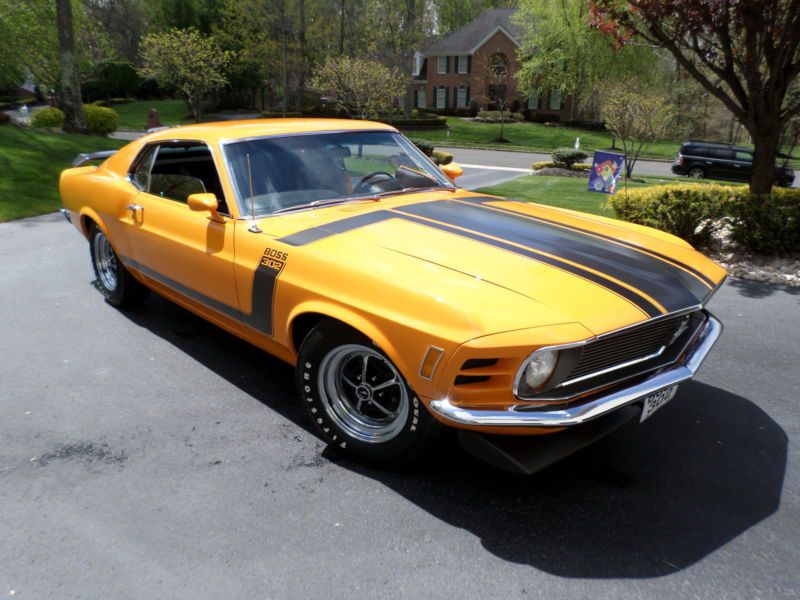 If you have any questions or would like to view the car in person please email me at: cicelycmmielczarek@barstewards.com .

Just finished, multi year rotisserie restoration on a solid Boss 302. This car was taken down to the unibody, media
blasted and restored to the level you see pictured. Floors are original to the car, only major sheet metal that to
my knowledge is not original to the car is the passenger side quarter panel and perhaps the battery inner fender
panel. Doors are original ford, as is deck lid and hood. Car is highly detailed under hood and under carriage. I
have lots of photo's of this car so is you are looking for a specific photo please ask.
Drivetrain while not original to this Boss is assembly line Boss 302 components. The partial vin on the block is
0F189800, I asked about this vin on the Boss forum and found it is a legitimate Boss vin from a vehicle that was
scraped. The trans is the correct RUG tag intact as a wide ratio four speed. Rear is an open 3:50 9 inch
differential. Before we purchased this car some 8 years ago the engine was rebuilt buy the previous owner, starts
right up no unusual noises and it runs cool, it does have a bit of a larger cam installed but it is not
problematic. Car has correct remanufactured distributor, with correct vacuum chamber, and the correct dated Holley
carburetor, correct fuel pump, complete smog system with vanes removed from air pump to make it non functional,
correct snorkel with original base. The rev limiter is a gutted voltage regulator housing with new harness. Correct
Autolite alternator too! This car still is using an assembly line Y pipe!!
Inside is a clean tach dash instrument cluster, functional up graded clock. Both dash panels were rechromed and
detailed, head liner is new, AM radio plays load and clear. Restored console assembly and restored Bill Herndon
steering wheel (horns work). New carpet and door panels. New reproduction dash panel, kick panels, sail panels,
sail panel lamps etc. As I mentioned the fuel gauge is intermittent and if possible I will try to have this sorted
out for the new owner.
Exterior had all the stainless polished and buffed, new bumpers, urethane base clear Grabber Orange paint with new
reflective stripes. All exterior lighting working. Rebuilt brake booster and master cylinder, rebuilt proportioning
valve and all new brake and fuel lines, new rotors, rebuilt calipers, new pads etc. etc. etc. New Magnum 500 wheels
with new Firestone Wide Oval bias ply tires. New front windshield, all other glass is Ford tinted.
This car was not a rusty car, it was and is extremely solid making it a great candidate for the restoration it
received. It is increasing difficult to turn out an authentic Boss restoration as most good used original parts are
long gone and what little is left in NOS service parts are priced to the heavens. So if you value a car that has
almost all Ford sheet metal and sports very good fit and body lines then take a long look at this car and you will
realize the dollars invested to bring a car to this level. I see many Boss 302's for sale that lack the hard to get
parts ( like the reverse lock out rod, carburetor, distributor, exhaust manifolds) and are past rust buckets and
are loaded with Chinese sheet metal sporting the poor fit and finish being advertised for much more than this cars
reserve.