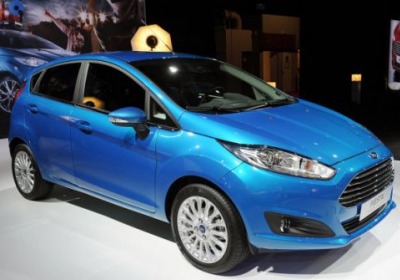 It's official: A panel of female automotive writers has chosen the Ford Fiesta 1.0-liter EcoBoost as the Womens World Car of the Year, and it beat tough competition like the Mazda CX-5, Range Rover and Porsche Boxster S for the overall top spot.

The CX-5 and Range Rover won the SUV and Luxury Car categories, respectively, and the Boxster S laid claim to the Sports Car category, beating the runner up Audi RS5 and third place Toyota GT86/Subaru BRZ (or Scion FR-S). The Audi Allroad was named the Family car of the year.

The panel consisted of 18 female automotive writers from around the world tasked with picking the best car in each of eight categories, including top vehicle overall, using criteria that women utilize when shopping for a car. That includes safety, value-for-money, aesthetic appearance, storage space, child-friendliness, ease-of-driving, color, sex appeal and environmental footprint.

For 2013, the award's categories were changed, and the three-tier voting system helps to ensure cars are thoroughly vetted before they become category finalists or winners. Judges supply their own list of 2013 models they've tested, which are whittled down to a shortlist of finalists for each category. From there, judges pick their winner and two runners up in each category, which are tallied up for the official results.

The Fiesta was praised by the panel for being a jack of all trades – judges described it as being stylish, fuel-efficient, fun to drive and technologically advanced – and having good value for the money, important factors that helped it beat the competition.

Check out Ford's press release below for more details on this year's award and the award-winning Fiesta.

The Ford Fiesta was assessed by the panel of 18 female motoring writers which judged the awards on factors including safety, value-for-money, aesthetic appearance, storage space, child-friendliness, ease-of-driving, colour, sex appeal and environmental footprint.

The stylish new Fiesta offers a bold new exterior, an interior optimised for ergonomics and comfort, and Ford MyKey – an industry-first technology that allows parents to encourage safer driving and limit their teenager's exposure to risk at the wheel.

The UK is central to Fiesta powertrain development and production – Dunton Technical Centre is home to the award winning 1.0-litre EcoBoost engine and production of high-tech low-CO2 diesel engines takes place at Dagenham. Fiesta has long been a British favourite - as best-selling car it currently outsells its nearest retail competitor more than two to one and has just surpassed four million sales in the UK.

"The new Fiesta has raised the bar to offer a sharper-looking, better-connected car that is even more fuel efficient and fun-to-drive," said Barb Samardzich, vice president Product Development, Ford of Europe. "By tuning into the needs of all our customers we are ensuring this small car with the big history has a very bright future."

WWCoTY UK judge, Victoria MacMillan Bell, said: "The Fiesta has a real high-end look and feel to it. Pair this with the multi-award-winning 1.0 litre EcoBoost engine which reaches range and performance levels never seen before, and this stylish pocket rocket wins in every category."

"It was clear from the outset that the new Fiesta 1.0-litre EcoBoost had struck a chord with our panel of female motoring experts from around the world," said Women's World Car of the Year chief judge, Sandy Myhre of New Zealand.

The fifth Women's World Car of the Year awards will be presented in London in October.