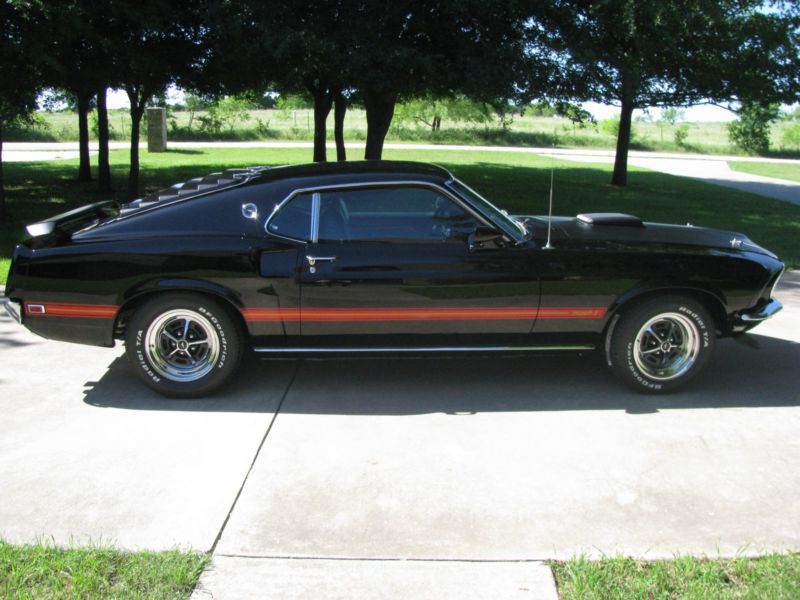 More infos regarding my car at: saraishhuckabey@celticfans.com .

1969 Mustang Mach 1 in it's original Raven Black exterior and black interior. Have owned the car for a couple of
years and like others it's time to make space and time for the other Mustangs and Camaro's I own. I will break
down the car in sections so it's easier to read:
Exterior: Paint is very nice with a mile deep shine as you can see in the pictures. Car still retains it's
original quarters, doors, fenders, front valance, rear tail panel and roof. I'm sure hood has been changed since
it is a ram air hood. Floor was replaced with a one piece floor due to the glue in windows leaking over the
decades and keeping the carpet wet. Floors rusted from the inside out. Underside is very detailed out and is in
the factory type red primer. NO RUST on this car. Hood has a small dimple under the trim ring for the ram air but
you can see it if you look hard enough. Otherwise, no scratches or dings on the car.
Drivetrain: As stated, all numbers matching. Engine, tranny, rearend still have all their factory tags on them,
engine and tranny have vin stamped on them as well. Car runs great and has a lot of get up and go between 2nd and
3rd gear. Engine is powered by Edelbrock E street EFI and Sump kit and flips on with the turn of the key every
time. Factory power steering and power disc brakes have been added to the car as well. Ram Air set up uses the
original bottom part of the air cleaner base which gives it the original look. Not the fiberglass bases that make
it stick up way to high. Exhaust is flowmasters that exit through the original dual tips in the rear. Wheels and
tires are new and only have a couple hundred miles on them.
Interior: Interior is pretty much all new and has been restored over the last two years. Fold down rear seat has
been added. Clock and map light work. Has vintage air a/c that blows nice and cold. Has modern radio that looks
old but you can use IPod and stuff like that with it. Also has tablet witch shows all your internals of the
engine. Interior is covered with dynamat from the firewall to the gas tank and makes for a much quitter ride.
Rear seat is original. Only piece missing is the rear panel that goes above the trap door.