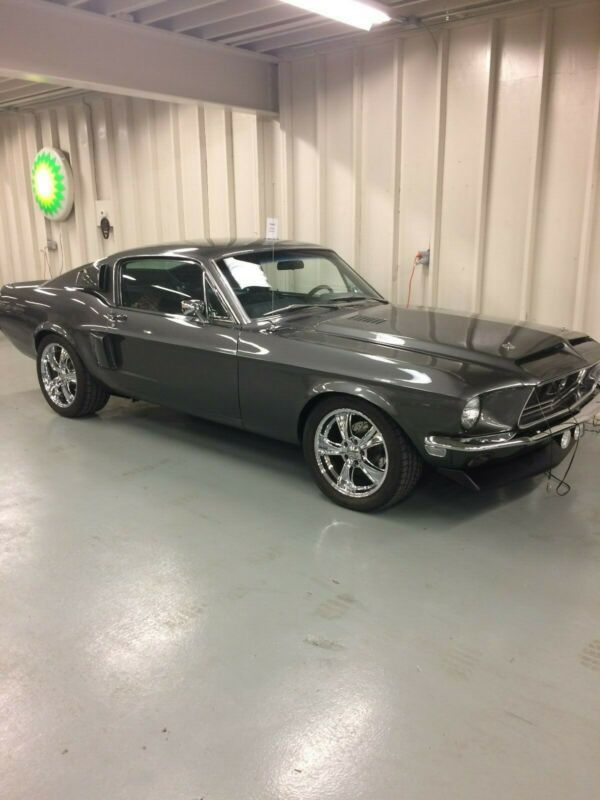 1968 ford mustang fastback frame up restoration that I completed 3 years ago . I went with the Shelby clone theme
and with a dark silver bmw color that makes the car stand out everywhere ( but I always hear is that Eleanor ). I
built this car for my wife but it never leaves the shop unless I take it out so that explains why it only has 2264
miles on it . as you can see from the pictures just about every piece on metal was replaced on this car and while I
was at it I put complete frame rails under the car which everybody knows mustangs did not have . the car has 4
wheel power disc brakes and the rear is a heavy duty 8 inch 325 posi with lowered heavy duty leaf springs and gas
shocks .the front end is a mustang two with power rack and pinion and tubular a arms with 2 inch lowering spindles
and gas shocks with a sway bar . American racing wheels that you never see and 17 inch up front and 18 in the rear.
the engine is a 435 horse 550 ft lb 465 big block ford with a wide ratio 4 speed and a 750 holley LOTS OF POWER AND
TOURQUE. the car runs and handles great . the interior is mostly stock black with the fold down rear seat and the
functioning trap door to the trunk but I did install a custom console and it has blue tooth and usb also.