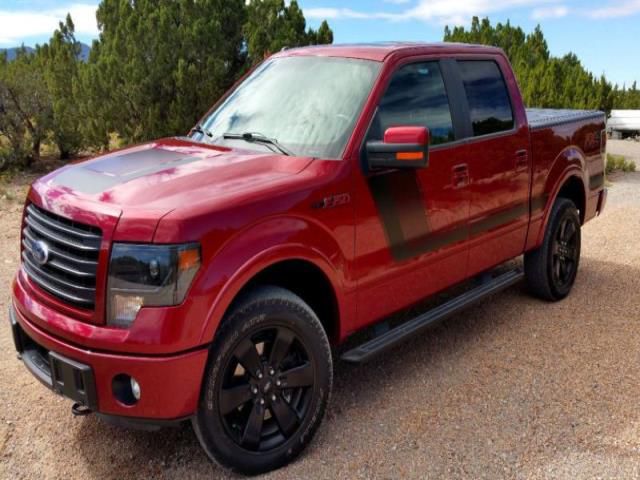 For more details eMail me : bapviredarowland@gmail.com

Are you looking for a vehicle that: ? Looks amazing ? Can go anywhere; do anything ? Offers performance and comfort ? Has great utility and practicality ? Is gently used at a great price Then look no further! This F-150 FX4 Supercrew comes with literally every option that you could imagine and bridges the gap between a: great-driving, high-performing, off-roading, luxurious vehicle - which makes it a perfect buy for anyone looking for any of the above criteria in a vehicle! This vehicle was made with the 402A model group specifications, which are listed in detail below. As per the vehicles build sticker, it includes the following: General: 2014 F-150 4X4 SUPERCREW145 WHEELBASE3.5L ECOBOOST V6 ENGINEELEC 6-SPEED AUTO W/TOW MODRUBY RED METALLIC TINTED CC - EXTERIOR BLACK LEATHER BUCKET SEATS - INTERIOR Exterior: DOOR HANDLES - BODY COLOR FOG LAMPS LOCKING REMOVABLE TAILGATERUNNING BOARDSSPARE TIRE & WHEEL LOCKTOW HOOKSWHEEL LIP MOLDINGS Interior: 1 TOUCH UP/DOWN DR/PASS WIN4.2 LCD CLUSTER SCREENAUTO DIM REARVIEW MIRRORAUXILIARY AUDIO INPUT JACK BLACK CARPET W/RUBBER MATSCRUISE CONTROL LEATHER WRAPPED STR WHEELSIRIUS SAT SVC N/A STR COLUMN Functional:4-WHEEL DISC BRAKES W/ABS12V AUXILIARY POWER POINT110V OUTLETEASYFUEL CAPLESS FILLERELEC LOCK DIFF RR AXLEELECT 4X4 SHIFT-ON-FLYHILL DESCENT/OFF-ROAD MODEHILL START ASSISTPOWER WINDOWS/LOCKSPWR RACK AND PINION STEERSELECTSHIFT TRANSMISSIONSKID PLATESTRAILER SWAY CONTROLTRAILER TOW PACKAGE WITH RSCAIRBAGS - FRONT SEAT MOUNTED SIDE IMPACTAIRBAGS - SAFETY ALARMSECURICODE KEYLESS KEYPADSECURILOCK PASS ANTI THEFTSOS POST CRASH ALERT SYSTEMTIRE PRESSURE MONITOR SYS MILE WARRANTY5YR/60,000 ROADSIDE ASSIST Equipment Group 402A: FX4 SERIESFX LUXURY PACKAGEHEAT/COOLED FRONT SEATSPWR DRIVER & PASSENGER SEATHID HEADLAMPSPOWER ADJUSTABLE PEDALSREVERSE SENSING SYSTEMPOWER SLIDING REAR WINDOWREMOTE STARTUNIVERSAL GARAGE DOOR OPENERELECTRIC AUTO TEMP CONTROLREAR VIEW CAMERAINTEGRATED TRAILER BRAKE CONTSONY SINGLE-CD W/HD RADIO Optional Equipment:2014 MODEL YEARRUBY RED METALLIC TINTED CC.SELECT SHIFT TRANSMISSION3.5L V6 ECOBOOST ENGINE3.73 ELECTRONIC LOCK RR AXLE7200# GVWR PACKAGE36 GALLON FUEL TANKFRONT LICENSE PLATE BRACKETPOWER MOONROOF NAVIGATIONTAILGATE STEPFX APPEARANCE PACKAGE.P275/55R20 OWL ALL-TERRAIN.BLACK TUBULAR RUNNING BOARDS As stated in the basic description, the truck has barely been used and only has just over 12,000 miles. Everything, from the paint to the interior, show almost now signs of wear and the vehicle still retains its new-car smell. In addition to the stock equipment, I have also equipped an AFE cold-air intake system (non-oiled) and a new 3.5 stainless-steel exhaust system to the vehicle. This not only increases horsepower, but makes the truck sound amazing. If I could attach an audio file for you to listen to this monster, I would - (if youre interested in the truck, send me an email and Ill send you an audio file of the trucks exhaust - it sounds really cool.) Additionally, the charge pipe has been upgraded to a powder-coated aluminum system over the stock plastic charge pipe. The bed of the truck has an installed Bakflip G2 Tonneau cover, which will keep the bed protected from the elements and increase fuel efficiency. The tires are Pirelli Scorpion performance tires that are specifically built for this version of the FX4. Included with this package is a tuning system that will allow you to change between a few presets - like a fuel efficiency or performance tune - that will allow you to customize your driving experience. With the MSRP of this truck being over $55,000 and with just over $2,500 in after-market upgrades, getting into this practically brand-new truck without having to pay a new car price is a great deal! As with any of my listings, if you have any questions concerning the vehicle or would like to know anything that isnt covered above, please let me know!