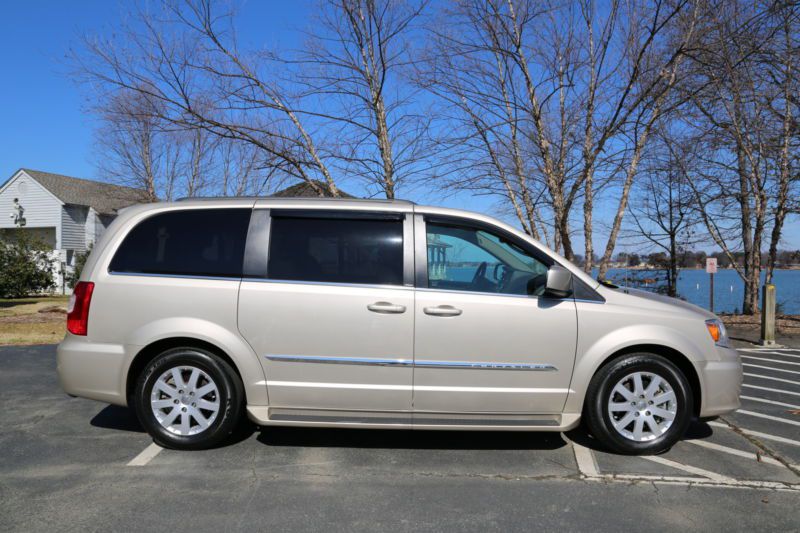 Send me an email at: theronthhawkey@worldfriend.com .

2014 Town & Country
Only 25,804 Miles
Still Under Original Warranty!
One Family Owned… Garage Kept… Florida Car…! Shopping for a family vehicle is especially important! This
beautiful 2014 Cashmere Pearl Chrysler Town & Country Touring Edition is a luxury passenger minivan that is
spacious, functional and meets all safety regulations. It is in Excellent condition! Practically brand new and with
only 25,804 miles on it. It has just been serviced and is still under the original factory bumper to bumper
warranty. It is essential for your family and friends to be safe on vacations and for around-town errands.
Mechanically, the 3.6L DOHC 24-Valve VVT V6 engine is rated Best-in-Class and it is coupled with a 6-Speed
automatic transmission. Chrysler color coded all main maintenance points under the hood with yellow labels for easy
convenience. The suspension feels taught eliminating that roll and wiggle feeling and it has anti-lock 4-wheel disc
breaks. It also has good fuel economy ratings of 17 city/25 highway. Other features are the running custom
boards and the tow-package ($1500 upgrade) Both slide doors are electric and there is mood lighting throughout the
cabin.The interior is leather and has a dark frost beige/medium frost beige scheme. It has Power door locks, power
quarter vented windows, second row power windows and air-conditioning with 3-zone automatic temp control. The two
captain chairs for the driver (power 8-way) and co-pilot are trimmed in leather and have comfortable, softly padded
armrests. The tilt Steering wheel is wrapped in leather with the radio controls mounted on it for easy convenient
and control. This 2014 Town and Country Touring Edition is blue tooth compatible, has navigation, universal garage
door opener and back-up cameras.There is plenty of cargo space; behind the third row seat is a 33cubic ft. trunk
with a mounted flash light and a big recessed light in the tailgate door providing ample amount of light. The
second and third row seats fold smoothly aka “Stow ’n Go” .Stow ’N Go seating system, allows you to fold
the third and second row seats into underfloor storage bins creating a large and clutter-free space. Each seat belt
is numbered for ease of creating 83.3 cubic ft of space. When not folded the third row seat sits up high providing
a great view to the second-row overhead 9-inch VGA Video screen or to the big overhead conceal sporting the main
DVD player. There are two wireless headphones and a 430/CD/DVD/MP3/HDD…40 GB Hard Drive with 28 GB available and
a 6.5 touch screen display. There is also a 115 volt USB port, streaming audio and six surround sound speakers.
This 2014 Town and Country Touring Edition minivan has all the high-tech bells and whistles to entertain your
passengers, transport loved ones safely while being economically efficient. A great investment for priceless
memories in return!