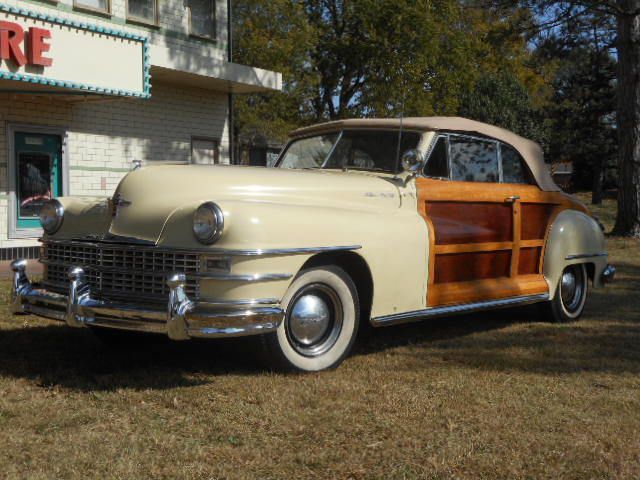 Send me an email at: victorinavhhadaway@rpgfans.com .

1947 Chrysler Town and Country Convertible
Collector stored inside for decades !
Make- Chrysler
Model- Town and Country Convertible
Year- 1947
Vin # C3945315
Ext color- yellow
Int color- tan
Title- clear Missouri title
Engine- Straight 8
Transmission- semi-automatic
Here is the bargain of a lifetime ! An original nearly 70 year old
Classic Convertible in almost original condition with excellent original
wood,no rust.
History- The last owner,"The Livingood Chrysler Plymouth Agency in Lincoln,
Kansas traded for the car in 1951 from a Carnival Worker who bought it in 1947 from
Krebs Chrysler Plymouth in Michigan City, Indiana.It was sold to another client in
Lincoln and was traded back to the dealership in 1953. It went into dry storage and was
all but forgotten until 1966. It was brought into the dealership and the parts department
replaced everything new on the car that was in the shop. New upholstery and carpet like
the original was installed. The wife of the owner wanted the car painted yellow. It was
originally a pale green. It has a new Hartz top put on in 2012 plus brakes, battery and minor
adjustments and repairs. The car is drivable and runs as it should.
Information- Car is sold with no warranties or representations " as is".