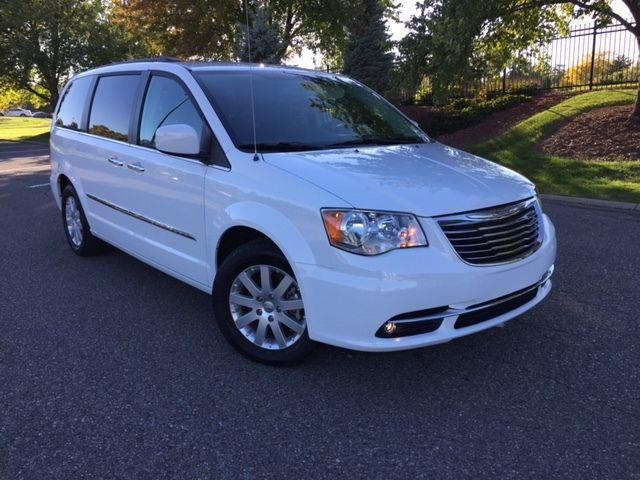 2016 Chrysler Town and Country Touring Edition This Mini Van is very clean and looks like new. You must see in in person and you will love it It was very well kept and all the maintenance up to date Always had oil changes on time and never went over Starts right up and everything works as it should Just get in and drive it across the country if needed Drive-train The engine is a 3.6L six cylinder engine making 283 HP which makes it very efficient with the eco system Chrysler has. The Transmission is a 6-speed automatic transmission making it very economic and giving you awesome MPGs Four wheel Disk brakes which stops this mini van on the dime. Options The interior is covered in beautiful clean black leather seats Has everything power such as mirrors windows and locks. TV system with DVD in the back Also has the input ports for the TV so you could hook up the kids gaming system on long trips Stow-n-go option with the fold in floor seats Power Tail gate There are a lot more options to this van but the list could go on and on Push to start Keyless entry and exit Important Information The vehicle has a rebuilt title due to an accident that happened earlier this year The insurance company declares a car as a total loss for cashing out the owner. The vehicle is then sold by the insurance company and issued a salvage title until its fixed After the Vehicle is fixed and inspected by the state (making sure the repair is done correctly) the state then issues a rebuilt title With the rebuilt title you can insure and register the car just as a clean title.   This mini van was fixed the right way and no short cuts were taken if you come see the car you will not even be able to tell that this car was ever fixed or damaged in the past Every bolt, clip, and plastic piece was put back as it was from the factory and restored to its original state
My eMail : nickssupplicate7@gmail.com

We can't yet share all the details on the 2015 Chrysler 200 sedan, but we can direct your attention to the image above, which was published by the boys at Jalopnik after Chrysler reportedly let it out by accident. As you can see, the new 200 will be a nicely styled piece of machinery.
According to leaked documentation, the 2015 Chrysler 200 will come with the buyer's choice of a 2.4-liter Tiger Shark four-cylinder engine with 184 horsepower and 173 pound-feet of torque or a 3.6-liter Pentastar V6 boasting 295 horses and 262 lb-ft. Those ponies will be routed through a nine-speed automatic with a rotary gear selector, sending power to the front wheels. Alternatively, a high-tech all-wheel-drive system will be available that can electronically disconnect the rear axle, saving fuel.
Speaking of fuel efficiency, the 2015 200 will be able to achieve up to 35 miles per gallon on the highway, which is an impressive figure for this class. An on-sale date has yet to be announced, but the next 200 will start at $21,700 (plus $995 for destination) when it does finally hit dealerships.